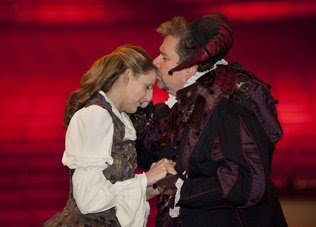 The characters and story in Rigoletto seem more real to me than most operas.  One could easily imagine real people doing these things.  Man hates job; boss seduces daughter; man seeks revenge on boss; even knowing everything, daughter still loves boss and takes the hit for him.  Verdi liked this plot because it was political:  boss is the king.  We don't really care about this aspect of the story.  Make him a rock star.  Perhaps that's what they intend to do at the Met next season.

I didn't pick up before that Gilda has only been living in Mantua with her father for 3 months, and that this provides an explanation for the fact that she seems to know nothing about him.

This was a full scale production with an interesting set (large violent pseudo-Italian paintings on each side of the Duke's palace) and outstanding period costumes.  It's all very conventional, but nice.  The staging for the Duke and Maddalena was a lot raunchier than I would have wanted to do.  Times are changing.

The best voice of the group was Andrew Gangestad as Sparafucile.  I see he's sung at the Met.  Maddalena was sung by a woman named Buffy Baggott.  Scott Ramsay as the Duke has a pretty but relatively light voice.  I could more easily imagine him in bel canto.  Katrina Thurman as Gilda was enjoyable to hear and an interesting actress.  Her Gilda seemed very real.

The opera rides on Rigoletto himself.  It's such a complicated role.  He is disgusting, foolish, devoted, and truly tragic.  As Rigoletto, David Small rose to the occasion.

Tim Rolek did his usual good job.  No one took the high notes.