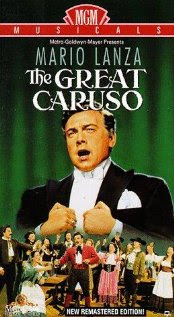 The Caruso family successfully sued MGM over the contents of the movie The Great Caruso.  I don't know enough to know what they would be suing about, but I do know that it's a charming movie.

Obviously Mario Lanza came into this life in order to make this film.  He was born the same year Caruso died and died young like his mentor.  He has a charming smile and manner, and he sings all the arias required for the role.  The singing is very nice.  His most frequent singing partner is played by soprano Dorothy Kirsten.

His death at 38 means he survived only the childhood of an opera singer.  He did not handle fame well and is often paired with Karen Carpenter in the short list of great singers who died young.


I was very much interested in the portrayal of the great tenor Jean de Reszke (1850-1925) in this film. There was a small overlap in the New York careers of the two tenors, with de Reszke retiring in 1904 just as Caruso was beginning. In the movie they were made to seem rivals of sorts, whereas in reality Caruso sang almost exclusively Italian repertoire while de Reszke sang primarily Wagner, Gounod and Meyerbeer. Was he the last great Meyerbeer tenor? The disappearance of Mayerbeer from the repertoire is something that interests me.