When I'm watching, I always remember that the libretto was written backwards--Götterdämmerung first, Rheingold last--and then it was composed in the opposite order.  This is why we have to listen to all those retellings of things we've already seen.  In the original concept the other three operas didn't exist.  It is also why we have to rehear every damn Leitmotiv that ever appeared.  Yes, that's Nothung all right.  And we know about the damned curse.

The Rhine maidens are still my favorite parts.  Eric Owens as Alberich and his son Hans-Peter König as Hagen were the only members of the cast with voices to match the traditional quality for a Wagnerian.  König received the ovation he deserved.  He was simply magnificent. 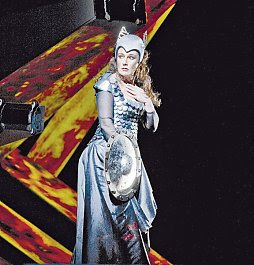 Our hostess Patricia Racette introduced the "legendary Waltraud Meier" in the role of Waltraute.  This was the best scene in the opera.  She deserves her legendary status. 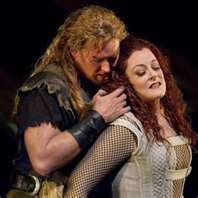 I enjoyed watching Jay Hunter Morris and Deborah Voigt.  Debbie was suitably melodramatic, and it was nice to see at least an attempt to have her ride Grane into the funeral pyre.  Jay is adorable, but sings the lightest Siegfried imaginable.

I keep remembering Placido Domingo saying, "Better too soon than too late."  He was referring to the fact that he began singing Otello while still in his thirties.  Deborah Voigt has been afraid of singing Brünnhilde, and has put it off into her 50's.  Her voice has more and more of an edge.  Let's just say I wouldn't want to sit and listen to an audio only version of this Ring, but the visual parts were quite pleasing.  Her Brünnhilde blazes emotionally just as she should, but she will not erase the memory of Eva Marton in her prime.

Wire walking seems to have disappeared as a concept--good riddance.  When she sets the pyre ablaze, we hear the music for "Loge her," but not the words. 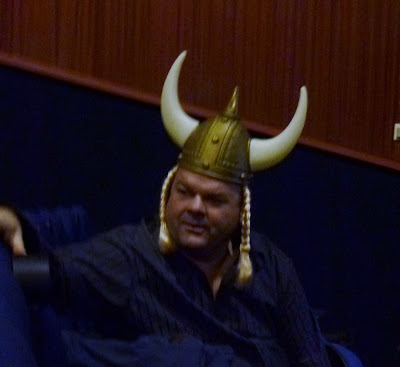 This is a member of our audience getting into the mood for Wagner's Twilight of the Gods.  They went down in style.  For me personally it was too much sitting for someone whose back is going out from not enough exercise.

And now I really must go outside and walk around.