Thanks to Intermezzo for pointing out this short interview in the Osnabrücker Zeitung. 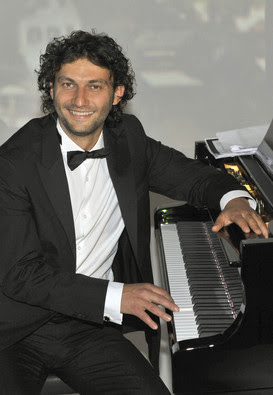 Opera star Jonas Kaufmann: Would not oppose a nude role in principle

Osnabrück. Opera star Jonas Kaufmann would have had no problems with standing naked on stage. "I would not reject it in principle," he told our newspaper.

However, the tenor expects more consideration to the needs of singers from modern theater directors - and more competence. He has sung in productions in which "you have to spend a large part of the rehearsal process explaining to the director the medium of opera." He was calling for "more respect for the composer." He has already interpreted the text. "If the production distances itself too far from it, the music no longer goes with the action, and thus is dissipated much of the effect, that reduces the effectiveness of opera."

Asked about his own effectiveness, Kaufmann said he found it on the one hand "quite flattering" to be adored because of his appearance. "On the other hand, I can only accept with difficulty that people project onto my person what I do on stage and with my voice." Because, "I cannot do anything about my looks! It's not like every night I pluck my eyebrows or smear creams on my face, so I look good," he said.

After three hours on stage, bathed in jubilation and euphoria, his family gives him a sense of security. There had been a brief period in which he had run the risk "of falling into a hole." But "I have now found a very good rhythm and I am, because I am a family person, very grounded. This does not mean that the family always has to be with me in order to give me comfort. It's enough for me to call them to mind. "
Posted by Dr.B at 1:20 PM