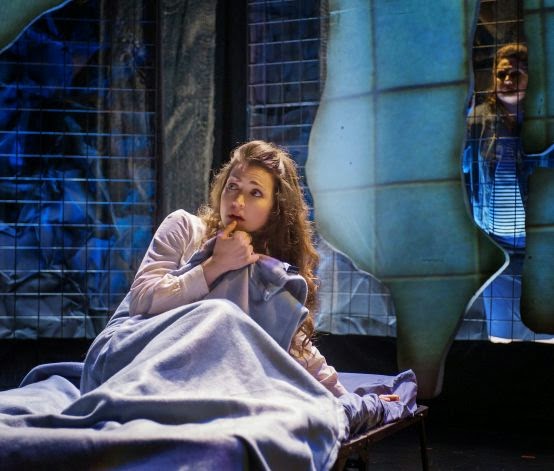 Anya17 by Adam Gorb is an opera about the sex trade that has won an award in England.  Anya thinks she is getting married but instead is kidnapped into the sex trade.  Carole and Mila are kidnapped with her.  This is a relatively distinguished cast for mostly local singers, but I think nothing saves it.

We are spared all hints of actual sex.  I hesitated to see this because I thought it might be sordid.  The problem is that it isn't sordid enough.  There is lots of violence, as much as would be possible without actually hurting anyone.  Mila is murdered before our eyes and Viktor is killed in a fight with Gabriel.

Was it worth it?  For me only the last scene really worked operatically.  Anya awakes in a hospital, tells about her status as number 17 in a menu of women, and ends the opera by remembering her name.  It's a true operatic mad scene.  But why hadn't we heard of this menu before now?

Was it worth it?  Shrug.

The opera was presented in the Marines Memorial Theater, an acceptable space with a lot of stairs.  The orchestra was partially hidden behind a scrim.  It worked pretty well.

I must mention the two dancers, Janet Das and Quilet Rarang, who acted as stage hands during the opera.  Their looks seemed to suggest gender neutrality, so they could come and go without seeming to blend with the action.

Thank you so much for your review of Anya17. I couldn't get to San Francisco from the UK to see the performances so am indebted to Critics such as you for letting me know how you felt about the Production.

It was so interesting that you felt that Anya17 "wasn't sordid enough". We have had some very enthusiastic reviews, some well measured, and one that said that Anya17 was "rude, vile and disgusting". - that's ok. All I can tell you is that it is very difficult to write something (particularly for opera) that will please everyone. I even had criticism for using the name "Gabriel" - which I borrowed from a good friend of mine, the internationally acclaimed Composer Gabriel Jackson.

Thank you again so much for attending the Production and for taking the time to write a review.

All the best,
Ben

Only ones imagination supplied the idea that they were enslaved to act as prostitutes. Perhaps it all went by too fast.