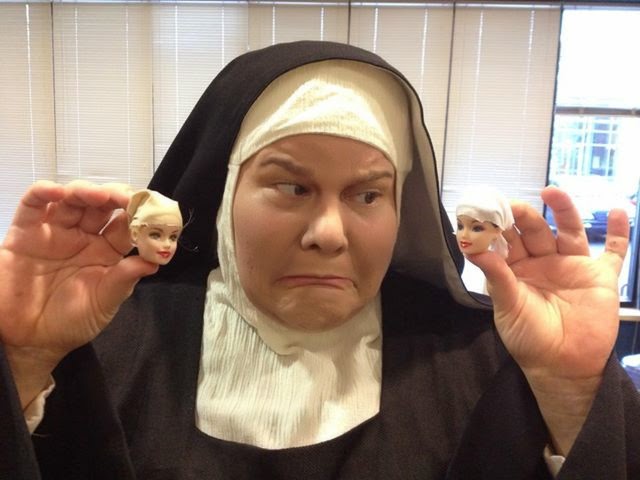 Nowadays I follow along on Facebook and Twitter to find out the singers' perspectives on the performance, and was surprised to see that a tray of cupcakes provided backstage at Dialogues of the Carmelites came with severed Barbie heads, here demonstrated by Meredith Arwady.  It took me rather too long to get this joke.

While I was away Peter Gelb cancelled the simulcast of The Death of Klinghoffer.  I feel that any comments I might make about this would probably be in bad taste.  The only acceptable excuse would be that donors threatened to withhold their donations, but I have not heard that this was the case.  When I saw this opera at its premier in San Francisco, I found it not nearly shocking enough.  It bothered me how matter-of-factly Mr. Klinghoffer was sent to his doom.  I haven't felt any desire to see it again, but thought I would because Szot was in it.  Here's what I said about this subject years ago:

"Next came Death of Klinghoffer which I saw in San Francisco. Is there even a prayer of making this live? The Klinghoffers would have to come alive for us, and they don’t. How can they? He was killed because he was Jewish and existed only as a symbol to the people who killed him. The symbol must become a person. Theater cannot be a newsreel—it cannot acquire its significance from outside sources. Because it meant something to us when we watched it on television doesn’t mean it will mean something as an opera. All the meaning must come from inside the work. Did I say that clearly enough? All the meaning must come from inside the work."

I try to remember to keep my mind open and receive each new performance as an entirely new experience.
Posted by Dr.B at 6:27 PM