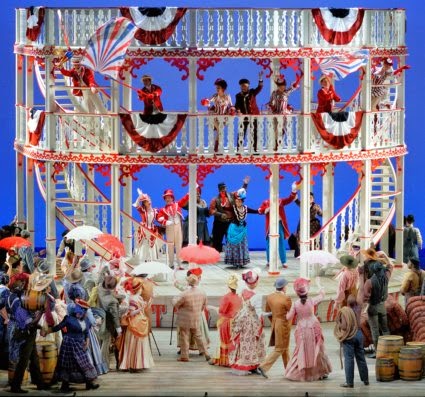 Last night's performance at the San Francisco Opera of Jerome Kern's Show Boat, book and lyrics by Oscar Hammerstein II, was my first musical at the opera.

I want to write about the use of amplification in this performance.  A friend told me that the first performance was criticized because the spoken dialog could not be heard.  I'm sure no one, including certainly me, would object to amplifying the spoken dialog.  Opera singers are trained to project their singing voices, but speaking is not that common in opera and when it is found it isn't nearly as large a part of the performance as it is here.  So fine.  The microphones and speakers used were fine for talking, but it was immediately apparent that this was going on.

The problem arises when the songs are heard.  Microphones in a large theater distort the sound.  Everyone starts to sound the same.  My friend didn't believe that "Old Man River" (sung superbly by Morris Robinson) was amplified until the repeat in Act II where it had been shut off.  Only without amplification do you hear the natural sound of the voice.

We had a couple of straight actors in Bill Irwin as Cap'n Andy Hawks and Harriet Harris (from Frasier) as Parthy Ann Hawks, his wife.  Bill was fabulous and even sang a little bit.

Our opera singers were Patricia Racette (who can do anything) as Julie, Heidi Stober as Magnolia Hawks who danced a bit and was beautiful in the role, Morris Robinson as Joe, Angela Renee Simpson as Queenie, and Michael Todd Simpson as Gaylord Ravenal, the gambler who marries Magnolia.  Can opera singers sing musicals?  When the musical is Show Boat, absolutely.

Francesca Zambello's production of this great American musical was shared with Lyric Opera of Chicago, Washington National Opera and Houston Grand Opera.  For me it worked.  The costumes reminded one of candy canes.  Each scene was clear and moved smoothly and quickly to the next scene.

The score is full of famous American songs, more than you expected.  Racette sang "Can't help lovin that man of mine" and "Just my Bill" in a convincing American pop song style.  Heidi and Michael sang "You are Love," one of the truly great songs.

we saw the same performance as you--in the first 15 minutes I was bothered by the amplification; there was some distortion, I thought. But after that either the sound board made adjustments or my ears did because I found myself grinning heavily (the rest of the night).
At a panel discussion a couple weeks before, we learned something interesting about the singers. the folks coming from "Broadway" were astonished that opera singers arrive at the first rehearsal fully prepared. "Legit-stage" actors are used to using their longer rehearsal/preview cycle/process to explore and develop their roles. For whatever that information is worth.
The night after Showboat, we saw SF Symphony's semi-staged Peter Grimes and are now officially in shock.