I am presently reading Beethoven: the Man Revealed by John Suchet.

It is very pleasing to read about such a chaotic life.  He lived in his passions as few great men have.  While Mozart obsessed over his clothing, Beethoven repulsed his long time patron because he wanted Beethoven to play the piano at a dinner.  "There have been and will always be thousands of princes.  There is only one Beethoven."

He had no one to empty his chamber pot or wash his dishes.  In the midst of this chaos he wrote his greatest masterpieces.  We are told about his diarrhea and other digestive difficulties, but never is it suggested that the lack of cleanliness in his environment might be a cause.

He told his opinions out loud.  There is a painting showing him snubbing the Austrian Emperor.  Goethe is shown doffing his hat and bowing, while Beethoven marches on. Notice that the Emperor, the man with his back to us, doffs his hat to Goethe, too. 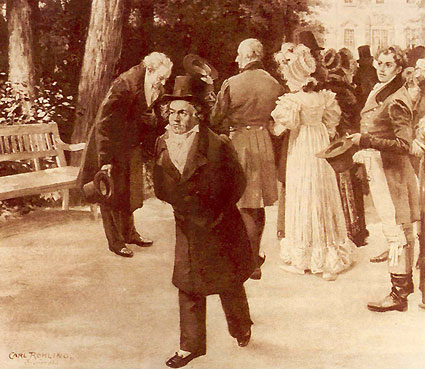 In Beethoven's life there are mysteries to be solved.  What caused his deafness?  How many people did he completely piss off?  And most mysterious of all:  who was the Immortal Beloved?  We learn that there was a woman who looked very much like Beethoven and was the child of one of the candidates.  There are letters in attics and fun things like that. Any biographer must present a candidate.  In this case two are presented.

The author is always telegraphing what is coming next.  Oh, this next thing is really terrible.  Stuff like that.  It's an easy read.

I love very much the description of him composing the tenor aria from Fidelio.  It is just as it should be.  I think with Beethoven his music and his soul are one.  His volatile emotions are everywhere to be heard in the music.
#ad