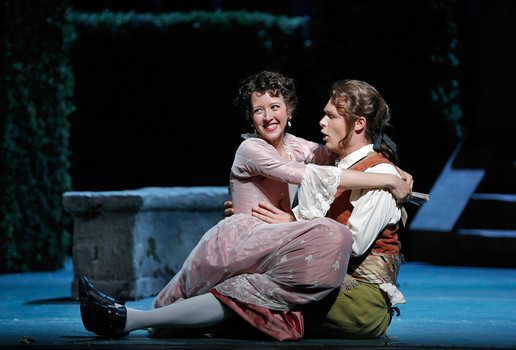 The San Francisco Opera has revived Mozart's Le Nozze di Figaro yet again.  It's a very traditional production such as the just retired one from the Met.  Susanna accompanies "Voi che sapete" on the guitar. Stuff like that.

I went for the very fine cast.  Some of the cast members are repeats from the last time:  John Del Carlo, Catherine Cook and Greg Fedderly.  Of the younger cast members Luca Pisaroni has moved to the elder statesman Count role.  The singing for everyone was excellent.

I think this version is designed around the Susanna of Lisette Oropesa, she who runs marathons.  There is a lot of athletic activity.  Cherubino doesn't just hide behind the chair--he runs wildly around the stage, even turning a cartwheel.  Susanna and Figaro wrestle around in the garden, and she does a martial arts throw at one point, sending him over on his ass.  Philippe Sly's Figaro is up to the task.

It's interesting that while the production is the same as last time, the directing is completely different.  It was designed for the maximum amount of confusion, at least for me.  Perhaps I should consider not trying to follow the plot. 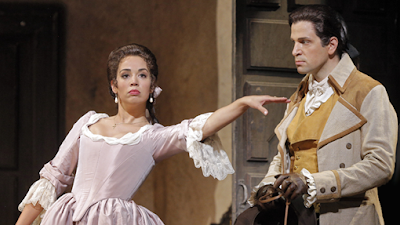 The tempos were brisk but I did not witness the loss of coordination reported elsewhere.
Posted by Dr.B at 9:59 PM