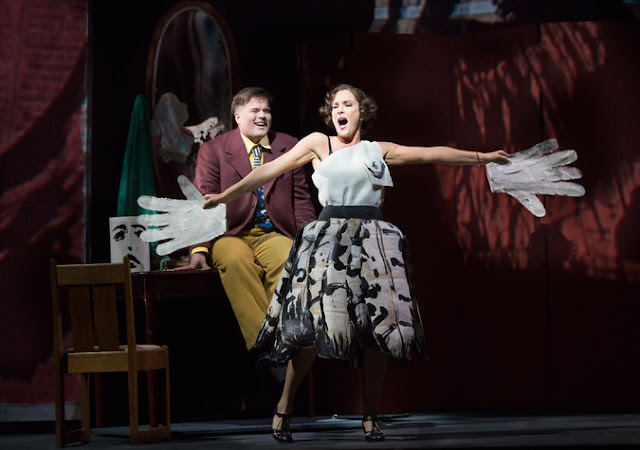 Today we were treated to Berg's Lulu live in HD from the Metropolitan Opera.  I have taken the liberty of correcting the Met cast list which said:  Alwa / Dr. Schön’s Son / A Composer Daniel Brenna.  This gives the impression that Daniel Brenna played three different characters when Alwa is Dr. Schön’s Son and a composer.

It is hard to know where to begin.  So let's try the beginning.  Most Lulu productions begin with animal cages, and it is only clear that Lulu is the snake.  In this production when the lion tamer announces the animals, we see each animal followed with a line drawing portrait of one of the men in the drama whom we assume is assigned to that animal.  I liked this.  Here is Lulu wrapping her snake-like arms around Dr. Schön. 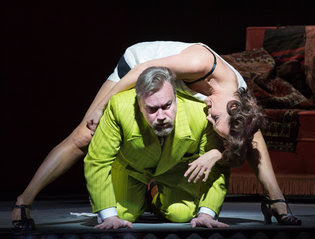 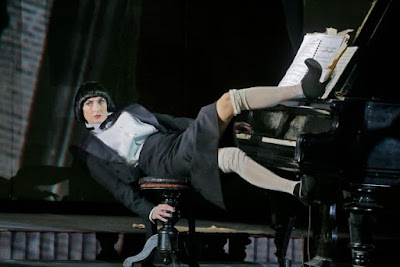 There is a level of professionalism in this cast that I have not seen before.  All were comfortable in their roles and at ease in the difficult music.  I have seen Lulu performed from the intensely sexual of Evelyn Lear at one extreme to the complete passivity of Ann Panagulias at the other.  Barbara Hannigan's mind always seems elsewhere.  Marlis Peterson is on the aggressive end of the spectrum.

Susan Graham was my favorite Geschwitz.

We never see the portrait of Lulu which the characters hold up and describe to us.  I have seen this opera often enough now to feel that I understand.  Certain women become the object of obsession of many men.  It's like being a movie star or perhaps an opera singer.  This work balances these many obsessions with the obsession of Lulu for Dr. Schön.  At the end she meets a man who looks just like him, in this production he dressed like him, and he murders her.

The result of my research on this opera has resulted in the conclusion that if you want high level professional performers and a fascinating production, you cannot beat this Lulu, but if you want to feel it as though it were life itself, you will need West Edge.