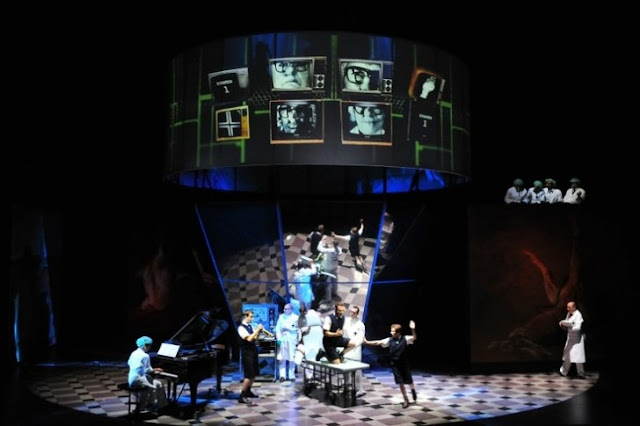 A full length, fully realized performance of Stockhausen's Donnerstag aus Licht (Thursday from Light) has been presented in Basel and live streamed through sonostream.tv.  If you hurry, you can see it for yourself.  It is important to notice that this work, composed in 1978-80, came very quickly after Philip Glass's Einstein on the Beach (1976).  My son assures me there is a full 7 day cycle, but we find one day sufficient.  The two operas, Donnerstag and Einstein, share the feature of having instrumentalists appear on stage as characters.

We will not pretend to always be able to figure out what is going on in this vast work.  It is about Michael who may be a person or may possibly be the Archangel Michael.  Or seems at times something like Jesus.  Or if we refer to the chart above, we may assume that Michael is the child of Lucifer and Eve.

A prelude.  Sort of.  People meander about the stage.  The only thing that distinguishes them from the crowd is that they are smoking and drinking.  Smoking in theaters isn't allowed any more.  We decided the cigarettes must be fake because they don't burn down with the passage of time and don't smoke unless you inhale.  This reminded me of the old days when practice room pianos had peculiar black marks all over them where the cigarettes had burned down.  Our musicians put their cigarettes down on the music stand or in one case on the bass notes of the marimba.  No black marks.  They look like a swing band when they play, but the music doesn't swing.

There is a recurring figure of a child puppet Michael whose mother gives him a birthday cake and a present.  One time he opens the present and light shines out.  THEME.  Father is also there.  Mama goes mad and is taken off to an asylum and put into a straight jacket.

The stage rotates showing entrances of women/birds.  On the right side of the stage are singer Lucifer and trombone Lucifer riding on a horse.  As Michael becomes attracted to each bird, father shoots her with a long rifle.  Bizarre.  Finally Michael shoots father just in time for Eve basset horn to enter.  She has an extended solo.  She has fake giant bare breasts which Michael tweaks.  This is my favorite part of the staging.

In the scene shown above it looks like a surgical theater but is supposed to be Michael's audition for a music school.  It is interesting to notice that the pianist and Michael reach inside the piano and pluck the strings such as John Cage might do.

This is basically a trumpet concerto with the solo performed by the trumpet incarnation of Michael.

We go on a trip around the world starting in Germany and going on to New York (tall buildings), Japan (illustrated with images of Godzilla whom Michael kills), Bali (gods and goddesses), India (elephants), Central Africa (zebras) followed by Turning Back, Jerusalem, Halt, Mission, Mockery and finally Himmelfahrt (a term I very much prefer to Ascension).

At this point there is some visual confusion when both Michael's costume and the person singing him change.  See cast list.  We are in heaven singing in praise of light.   A pregnant Eve is there.  All of the characters reappear.  Mom comes out with a large birthday cake which opens for Dancing Lucifer to pop out.  He is followed by Trombone Lucifer.  Both are costumed as drag queens.

Singing Lucifer appears as Satan and there is extended theological discussion.  God and man communicate through music.  All the Michaels are now present.  Michael removes child Michael's mask.

Trumpets play outside the theater.

The music of Stockhausen present in this opera does not resemble Philip Glass.  Glass likes repetition of short fast themes.  Stockhausen seems to like long drones with two or three note phrases and nothing resembling traditional harmony.  I'm used to Glass, but this is new to me. Long sections of choral music in Acts I and III were taped years ago by Stockhausen and are played in any performance of this work.

I have experienced the German avant-garde from the inside, and this is an historic occasion.  It is important to mention in closing that the three performances of this work are first La Scala, then London and now Switzerland.  None have been in Germany.  I have a new label "avant-garde" for the twentieth century avant-garde.
Posted by Dr.B at 7:19 PM