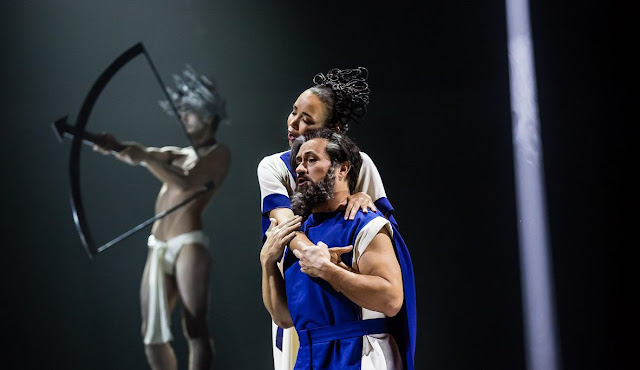 This performance from the Paris Opera of Eliogabalo by Cavalli in Italian with French subtitles is rather more cold than even I can tolerate.  I tried watching it without knowing anything, and this didn't work out for me.  For an excellent discussion of this production see The Idle Woman. It was composed for a Venetian carnival performance in 1668 which did not take place.  Many speculate why this would happen.  Cavalli was the most important Venetian opera composer but was coming to the end of his life.  It may also have been censors.  One writer suggests that it may have been too serious for carnival.  It's first performance was in 1999, then René Jacobs revived it in 2004, and it's played in several locations since.  A description of the plot can be found here.  View the stream here.

The music is clearly still in the style of the late operas of the great Monteverdi.  I am no longer "cold" in this aspect of the performance and enjoy it very much.

Campidoglio (the square on the capitol in Rome)
Emperor Eliogabalo has returned to Rome.  A rebellion by the Praetorian Guard has been put down.  The plot concerns itself primarily with his sexual interests.  He's no longer interested in Eretea and needs new women to harass.  There are frequent appearances of young men wearing only loin cloths, such as our Amor above.

I find the arias, especially by Nadine Sierra and Paul Groves, particularly beautiful.

Hall in the Senate
I've been in the Senate and there are no halls.  Women in tall hats are entering.  Eliogabalo has replaced the male Senate with an all female one.  Eliogabalo himself is dressed as a woman and sings their praises.  We can say already that this opera is about cross-dressing, mostly men dressing as women, such as Lenia who is a tenor.

The women cover their faces and are told to embrace one another.  The one who guesses who is touching them wins.  Atilia guesses and becomes a proconsul.  Flavia cannot guess when it is Eliogabalo and goes off embarrassed.

If you are tired of the impossible to stage da capo arias of Neapolitan opera, this may be just what you want.  This is from the era when the composers wrote their own recitative and regarded it as an important part of the work.  This opera is strangely relevant.  Who would have thought our own country would become something like this.

The most shocking thing about this production is how not shocking it is.  Obviously Eliogabalo is a scandal.  How can such a dark and low key production express this scandal?

Eliogabalo prepares a banquet with two prominent pitchers.  Zotico and Lenia taint the pitchers--one is sleeping potion and the other poison.  Nerbulone drinks the sleeping potion.  Large black owls descend on the table, and the banquet is cancelled.  The owls dance.  Franco Fagioli is enjoying a peak in his career.  His countertenor is very robust.

I am a fan of Nadine Sierra and am happy to see her performance here.  Eliogabalo is the only character who gets interesting costumes.  He sticks his arms and feet into a bath and they come out covered in gold.  He gets in.  One of the people dressed in a loin cloth appears to be a girl.  He thinks about Flavia while everyone else thinks about killing him.  Eventually they succeed.

One would choose an opera about this particular Emperor for the debauchery, surely.  It was probably rejected for the seriousness.  I personally would have liked a less serious production.  The music is glorious but just a little long.

Circo Massimo
Everyone is at the games, but Eliogabalo does not arrive. Then it is reported that he is dead.  Flavia brings in his head and explains that the guards killed him when he broke into her room.  Alessandro becomes emperor, marries Flavia and everyone lives happily ever after.  This music is very beautiful, but I imagine the Venetians wanted more bang for their buck.

An episode of Xena Warrior Princess shows Caesar being killed in the Senate in Rome, which is not what happened. It was nearby but not inside the Senate. What was interesting to me was the portrayal seemed accurate to me. The Senate would have looked like that.