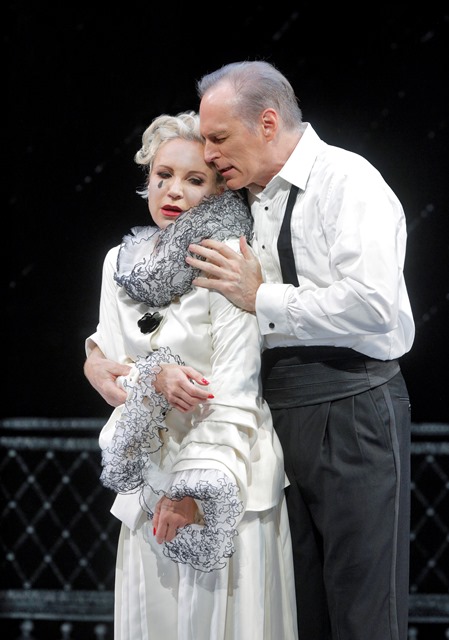 The Makropulos Case by Leoš Janáček was presented last night at the San Francisco Opera.  It is interesting to note that this opera made its American premier in 1966 in San Francisco.  I think this opera doesn't quite work.  Perhaps it works when you are seeing it for the first time and don't know what will happen.

For most of the opera it seems to be about a lawsuit between Albert Gregor and Baron Jaroslav Prus over the estate of  "Pepi" Prus, a lawsuit that has been going on for at least 100 years.  It sounds like a Dickens novel.  One side of the lawsuit, Albert, has a rumor saying Pepi promised the estate to his ancestor, while the other side, Baron Prus, is a distant relative of Pepi.

The opera is actually about a glamorous young woman who appears in the law office with information that may resolve the case in Albert Gregor's favor.  She knows where the will is to be found.  The woman is Emilia Marty, a famous singer.  I'm not sure I want to explain the entire plot.  Emilia was born Elina Makropulos in 1585 in Greece.  At 15 her father gave her a potion that made her virtually immortal.  She has lived in various countries under various assumed names, including Ellian MacGregor, making her Albert Gregor's ancestor.  This is also the reason she knows so much.

The opera has an astounding role for a dramatic soprano.  I'm sure our Emilia, Nadja Michael, could hold her own against any of the others.  It is staged in a very physical way.  She climbs on the furniture and shows off her swimmer's physique.  I have previously seen her here as Salome and live in HD from the Met in Bluebeard's Castle.  She brings to the stage a huge voice and thrilling intensity.  She is what you would want here.

Over the course of the opera Emilia realizes that she has lost her lust for living and explains to the other characters that it is death that gives life its meaning.  She allows herself to die.  The opera ends well, except we never hear how the case came out.