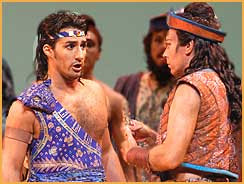 👍🏻
Bizet's The Pearl Fishers is a flawed opera. In this era of super-titles we don't expect to study the opera before we go, so we are unprepared for the fact that large parts of the plot have already taken place before the opera starts and are never adequately explained by the action.

The two main male characters, Zurga and Nadir, have both fallen for the same woman, Leila, and in the famous duet in Act I they promise that no woman will be allowed to come between them. Sure. In a conflict between sex and friendship, at least in opera, sex always wins.

The relationship between Nadir and Leila is well handled. When Leila comes out veiled as a priestess, Nadir immediately recognizes her while Zurga remains clueless. In Act II Nadir finds Leila in her guarded part of the beach and some wonderful love music ensues.

The ending doesn't really work. Zurga is wildly jealous for no reason revealed by the action. Then he completely reverses course because of a necklace which is too small to see. If it's a big necklace, why didn't he see it sooner? Leila and Nadir get away, and Zurga dies.

This is all supposed to take place on the beach in Sri Lanka. The religion seems to be Hindu while Sri Lanka is Buddhist. Oh well. This is just opera.

What does work is the music. Bizet successfully creates the lush atmosphere of a tropic beach with music that resembles warm breezes and soft waves lapping, just the place for moonlit romance. He has done the best he could with what amounts to about 2/3 of a libretto. In this performance the integration between orchestra and singers was complete, resulting in a satisfying sensual bath. The conductor, Sebastian Lang-Lessing in his San Francisco Opera debut, gets major credit for this.

The production by Zandra Rhodes was the star of the evening. She uses a lot of vivid color and design to represent a tropical paradise. There were some gorgeous actor/singers to wear her skimpy costumes. Charles Castronovo was gorgeously hunky as Nadir, as well as a fine, though very light tenor. Norah Amsellem as Leila was extremely attractive physically and vocally. DE pointed out that her figure with thin waist and wide hips matches the Indian ideal of female beauty.

The French singing was very fine. It was very much a French experience.