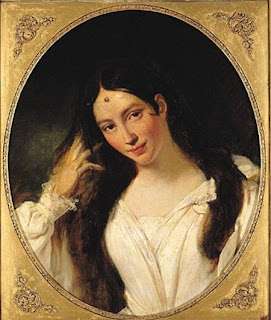 [Interesting stuff about Maria Malibran from a web page called titel thesen temperamente. I have translated the German but left out the original so you can't tell how bad a job I've done.]

Simply to stand on the stage and to sing beautifully, is simply too little. Cecilia Bartoli is one of the most popular and most successful Mezzo Sopranos of our time, but she wants still more: for some years she specialized in bringing unjustly forgotten composers to the light. Now Cecilia Bartoli with Maria Malibran wants to remind us of one of the most important voices of the Romantic era.

She sees in her her model and alter-ego: "La Malibran", as she is called by her admirer, was the bel canto superstar of the 19th Century, she was Bellini and Rossini’s muse. She was the superstar for a whole generation, and the face of terror for all moralists; because the Malibran did not skirt around conventions. Wherever she went, she brought notoriety, Malibran porcelain figures were sold as souvenirs - she was the Popstar of her time.

For years Cecilia Bartoli has collected together objects of her great idol. Now she wants to make her private collection accessible to the public: in a large truck she furnished a rolling Maria Malibran-Museum, that wherever it is parked in European cities, will be accessible to visitors free of charge. With her new album "Maria" Cecilia Bartoli wants in addition on the occasion of her 200th birthday [born March 24, 1808] to remember the great prima donna.

ttt [the web site] met Cecilia Bartoli in Lucca - briefly before her rolling Malibran museum started from Italy to Germany to the exhibition premiere.

[Text of the interview: ] She is anything but a snobbish opera diva: Cecilia Bartoli, one of the most successful singers of the present. She sells CDs like a Pop star and fills the theatres like no second person - for twenty years! The Italian lives her arias, transforms on the stage, is in all roles completely absorbed.

Nevertheless as if her own fame would not be enough, she brings now another Mezzo Soprano back into the footlights, Maria Malibran, the mother of all divas: In the 19th Century she was a Popstar such as Madonna, turning the masses into ecstasy. She connects with Bartoli still more.

Cecilia Bartoli: "She was the first opera singer, who broke with conventions, that fascinates me. In addition she was a fantastic actress - with lots of charisma."

Bartoli discovers her love for Maria Malibran, who sang everywhere, in Italy, Europe and even America. Who, pregnant, died in a riding accident at only 28 years. Bartoli studied the original scores of her repertoire, collected letters, personal things of the diva. And has now built a small, fine museum - and set it on rollers. The Malibran Brummi [sorry, I can’t translate that] now criss-crosses Europe, first station: Germany.

Cecilia Bartoli: "She was a woman, who wanted to emancipate herself in every sense: She spoke many languages, negotiated her fees herself, was admired by composers and poets of the Romantic Era, such as George Sand. She was politically engaged. But above all she had... fires under her back [no idea what this means-translation is literal]- her parents were Andalusians!"

This fire has also Bartoli. She sings an aria, which Malibran's father, the composer [and great Rossini tenor] Manuel García, had written for his little daughter. When La Malibran sang it, listeners fell in a faint: Maria had the beauty of a gypsy - the first "Carmen", before there was a "Carmen" by Bizet.

Also Cecilia Bartoli as a teenager wanted already to be a small Carmen: Before she went into the opera, she danced Flamenco against the will of her parents. Also she is - like Malibran – descended from a family of musicians. Cecilia and Maria - two soul sisters...

Cecilia Bartoli: "I find it mad that Maria sang this aria of her father’s again and again. Even in Rossini's 'Barber of Seville’ Malibran sang Flamenco and infiltrated the operas of that time with Spanish folk music.”

But La Malibran jumped over still different borders: On the stage she wore jewels, in real life she wore trousers. She released scandals. Because she left her 30 years older husband, who bored her, for her true love. An illegitimate child, a lover, whom the diva did not hide: the violonist Charles de Bériot - her great passion.

Perhaps the great Mendelssohn, who admired Malibran, wrote this piece, "Infelice," only for her. Bartoli rediscovered it and for the first time took it up.

Cecilia Bartoli: "Malibran's voice will remain always a secret. If I could, I would go to her and say: 'sing something to me!' "

That sounds a little coquettish, if Bartoli said this in a calculated way... Maria and Cecilia - two great voices, two great women – now together on tour.

Thanks !
The last but one sentece has got another meaning than you translated. It reads: "Es klingt etwas kokett, wenn ausgerechnet Cecila Bartoli das sagt".This translates roughly into: "It sounds a bit coquettish if somebody great as Cecilia Bartoli says that."