I am watching three different films of Aida at the same time, two of them from my tape collection and one a new purchase. No film of Price is currently available.

Aida starts out with "Celeste Aida," one of the toughest arias in the repertoire. What could Verdi have been thinking? I remember there was a horrendous stink about this aria in the San Francisco newspapers after Pavarotti did his first Radames there in 1982, but this film of him two years later is quite fine.

McCracken is sufficiently spinto but insufficiently lyrical. Placido is by far the best of this trio. He sings an extra line at the end that doesn't appear on any of the others. Traditionally this aria stops on the high note.

On YouTube I like this version with Richard Tucker, a surprise. He is the most lyrical. Lots of guys can punch out the high notes. The trick is to get it to sound like a love song. We could declare a "Celeste Aida" contest. I can't seem to find a Bjoerling version.

I like Licitra's style, but something stands between him and perfection. I think it may be inadequate physical conditioning. More secure control of the phrase might make an enormous difference with him. His scooping is right. Is it "Celeste Aida" if they don't scoop? I read on YouTube people complaining about even the tiniest amount of scooping, scooping that I did not notice at all. I assume that means they don't really like Italian opera.

The two Met films have similar but different ancient Egyptian productions. They are trying to bring Egyptian wall paintings to life, and real people just don't look like that.

The Stemme/Licitra version is set in the nineteenth century, perhaps contemporary with the original performance of the opera in Cairo. 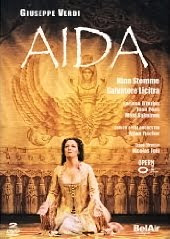 The march scene is fabulous in the Aprile Millo version, with live horses and elephant tusks. The whole production is the best that could be imagined, with monumental Egyptian buildings that feel real. Dolora Zajick may not be as great as Fiorenza Cossotto, but she is quite fine. In the Stemme version they wave the Union Jack to show victory.

Number two is definitely the one to buy. It has the best cast--all of the main roles are very well sung--and the production is exactly what you would want if you own only one Aida. I love Leontyne Price in this opera, but she is not at her peak in this video. Some arias from this film are available on YouTube. This is the year of her retirement from the Metropolitan, who honored her, perhaps the greatest Verdi soprano of all time, with farewell broadcasts of both Aida and La Forza del Destino, her most famous roles.

For Price at her peak you will need one of her recordings, perhaps the blue album. Don't get me wrong, not at her peak is still better than almost anything you'll hear. For Price in her prime listen to this video of "O patria mia." It simply doesn't get better than this. Just listen to how she diminuendos on the last note.

Price's retirement film is flawed by the unsatisfactory performance of James McCracken, and Licitra is only somewhat better. Both Placide Domingo and Sherrill Milnes can still hold it together, and Aprile Millo is excellent.