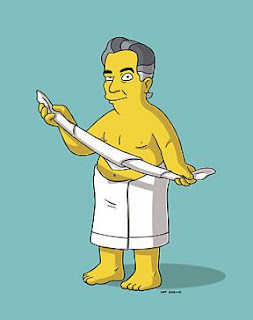 Homer ate too much dirt and became a good singer. We cannot recommend this without further testing. However, he could only sing lying down. At this point there was a plug for Andrea Bocelli who, it was claimed, has also sung lying down. Thankfully, he did not appear in the episode. Placido Domingo appeared briefly in the locker room after a performance. He sang just one (lovely) note and asked Homer for advice. So what is his fee for one note? Homer said Placi was his third favorite tenor.

Funniest part of episode was when Homer acquired an entourage. Marge did not like them.
Posted by Dr.B at 11:25 PM