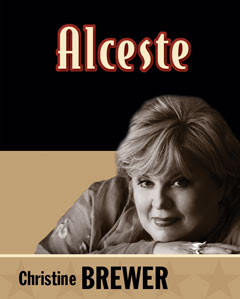 If it's Wednesday at the Santa Fe Opera, it must be Gluck's Alceste, pronounced al-SEST-uh when they are singing her name in the opera. Admete (ad-MET-uh), the king of Thessaly, is dying, and the oracle says that if someone else will volunteer to die, he will be spared. His beloved wife Alceste volunteers. When he recovers, she is still alive, and he asks her why she is not happy and celebrating with the others.

I'm giving the plot because nobody knows this opera. In this production they drag the dying king around the stage throughout the first act even though he has no lines. Then in the second act when he has recovered, he does a Greek dance with members of the ballet. The time and place for the opera would seem to be almost modern Greece. We are seeing the French version which includes a lot of ballet, performed primarily by dancers costumed as imps from hell.

The king hounds Alceste until she admits that it is she who will die in his place. Hercules appears and all descend into hell. There's a scene where Admete and Alceste compete over who will die. Death gives the choice to Alceste, but Hercules persuades them all to return. Then Apollo appears and allows both of them to live.

It isn't clear exactly what's going on, but there is intended to be a happy ending. Operas still usually had happy endings in that era. In the Santa Fe production a sign saying "La Mort" is carried out and when it is wrapped around someone, that means they died. In this manner they kill off an old couple at the end, and the opera ends with both Admete and Alceste dying. The music just kind of peters out.

The music is endlessly soothing and peaceful. Sturm und Drang has definitely died by this time. And, yes,Handel was right--there is not the tiniest hint of counterpoint. It took substantial doses of the excellent coffee provided by the opera to keep awake. The monotonous texture of solo singing with virtually no duets or ensembles is broken only by the chorus, a very welcome change. The chorus work at the Santa Fe Opera is excellent.

Why do this somber work? Berlioz is supposed to have liked this opera. Because it has a marvelous role for Christine Brewer, and she asked to be allowed to sing it here. She sings virtually throughout the opera and has a couple of marvelous arias. "Divinite du Styx" at the end of act one is especially rousing. The action is not too demanding. She was blocked in such a way to allow for occasional sitting. It is not too common to experience Brewer in an opera, especially one that is so perfect for her talents. Hear hear.

Sharing the stage with her was the excellent Paul Groves as Admete. The opera lasted about half an hour too long for me, and I could be heard muttering "Gott sei dank" when the lights finally went down at the end.

The eleven year old Mozart attended the Italian version of this opera in 1767 in Vienna with his father.