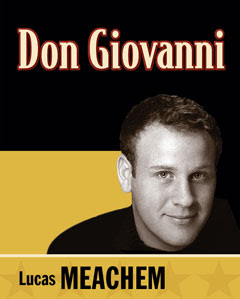 Don Giovanni was the last of my five straight nights of opera at Santa Fe. The set was done all in red, even the trees. Donna Elvira was also all in red. It wasn't too much red for me. Dramatically it worked quite well, and I don't really feel like writing about all the details.

For me this was the best night overall for singing. In order of my preference:

Susanna Phillips as Donna Elvira. I liked her sound and her feeling. She was a Santa Fe Opera apprentice in 2004.

Kate Lindsey as Zerlina. She is billed as a mezzo but didn't sound heavy at all. She was an apprentice in 2003.

Elza van den Heever as Donna Anna. Her voice is big without being heavy and dominates the ensembles.

Lucas Meachem as Don Giovanni. He fought the current trend and didn't take his shirt off.

Other people liked Charles Workman as Don Ottavio better than I did. He seemed to be trying to darken his voice more than I like for Mozart. He seems to be the guy that sang Jupiter to Cecilia Bartoli's Semele in Zurich.

After five days of opera, it is hard to form opinions any more. Lawrence Renes conducted.