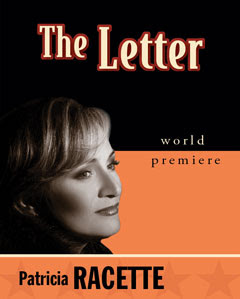 The opera The Letter may truly be said to belong to Patricia Racette. A new opera commissioned by the Santa Fe Opera, it received its first performance on July 25. She consulted with the composer on how to write for her voice. This is something that Gluck sneered at, but I'm always glad to hear when a composer works with singers. I think it was successful in this case.

The tenor/lover's role is enhanced through flashbacks, including a complete reconstruction of the scene which led up to the murder. She shoots him twice. This includes an effective love duet and is in general the heart of the opera.

Patricia Racette is a great artist and was completely in her element here. Her character runs the gamut from romantic love, passion, deception, cruelty and rage. It is virtually a dream part.

My take on this opera is that it is dramatically quite effective and that the music enhances the drama. It lasted only an hour and forty minutes. We had our doubts about the ending. There was no proper dramatic build-up for the suicide. In the movie the Chinese woman kills her. If she is going to kill herself, we need to feel it coming, and we don't.

The music by Paul Moravec did not intrude into ones consciousness. Nothing in this opera could not have been composed for the Bette Davis movie in 1940, and it functioned in the drama much like a movie soundtrack, heightening the drama while not calling attention to itself. Though the style of the music is clearly from the first half of the twentieth century, the overall effect was engrossing and quite pleasant.

Patrick Summers, the music director of the Houston Grand Opera, conducted. I was pleased to see James Maddalena as the lawyer who actually regrets his sleazy behavior. His portrayal was moving.

I probably haven't said enough. With new operas one always wonders if it will be produced again. It is a work that could be performed by second tier companies with big orchestra budgets. How about paired with Gianni Schicchi? 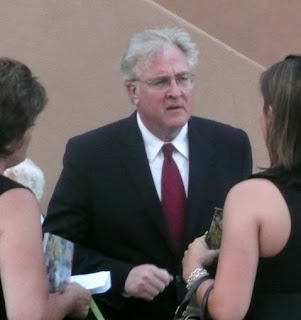 This is the composer talking to fans.
Posted by Dr.B at 2:07 PM