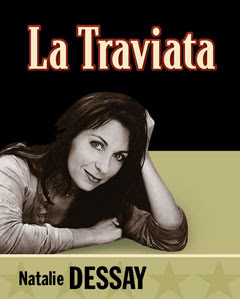 In the autobiographical novel La Dame aux Camélias by Alexander Dumas the Younger the life of the courtesan Marguerite Gautier is presented in flashback after she has died. The production of La Traviata at the Santa Fe Opera uses this device. During the somber music that opens the opera, Violetta’s coffin is carried across the stage while Alfredo looks on. The novel formed the basis for the play of the same name, which in turn formed the basis for the opera by Verdi.

What makes this production special is that it is Natalie Dessay’s first Violetta on any stage. The performance is about her.

It is clearer than it has ever been that we are being shown in act I and the second scene of act II two parties being thrown by two prostitutes, Violetta and her friend Flora, for their rich clients. There is no sedate nineteenth century dignity here. When Natalie is carried on to the stage in her flaming red dress, she raises her arms and screams as loud as she can. There is drinking and carousing. At last we see why we should be shocked by her. Violetta is a party girl.

At Flora’s party the gypsy music is staged as the girls displaying what they have to offer to the highest bidder, and the men pretending to be matadors in pursuit of them. This was very effective.

However, we are not always sure of our footing with regard to period. The men wear nineteenth century top hats, especially the already quite tall Laurent Naouri who sang Giorgio Germont. But in the same scene Violetta wears pants, something I don’t recall hearing of anywhere outside the wild west. It gives her freedom of movement to show how healthy and happy Violetta is feeling at this time.

The floor of the stage is littered with large gray rectangular boxes, requiring Natalie to jump from one to another throughout the opera. Violetta may be dying, but Natalie Dessay is obviously quite athletic.

It is a Traviata for Natalie. Her vocal fragility becomes the heart of her characterization. We feel the emotions of each scene instead of merely seeing them written on the translation screens. We felt her reluctance to give herself to love followed by her complete commitment. We felt Violetta’s growing illness and death as real events. In this production she dies entirely alone. 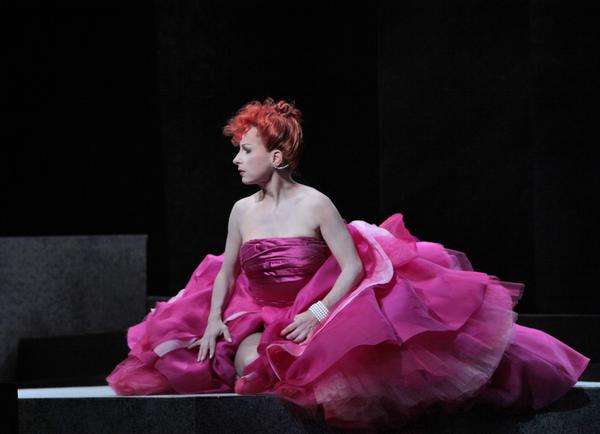 Laurent Naouri is a beautiful singer one would like to hear more of. Alfredo was sung by Saimir Pirgu who is Albanian and quite adorably handsome. Is that enough to guarantee him a career? We’ll have to see.

Frédéric Chaslin conducted. He is part of a whole team that accompanied Natalie from France, including Louis Désiré, Laurent Polly, Chantel Thomas, and Jean-Jacques Delmotte who did the scene and costume designs. 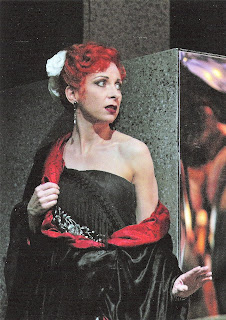 I think at this point there will need to be a personal moratorium on La Traviata.