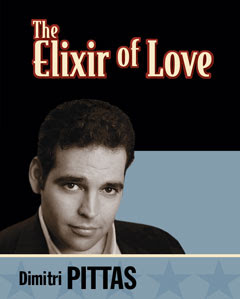 I don't have to tell anyone the plot of Donizetti's The Elixir of Love, I'm sure. And I'm not giving anything away to tell that the elixir is a bottle of claret. At the Santa Fe Opera the hero Nemorino has a car repair business directly across from the school where Adina teaches. Nemorino spends his time repairing a red sports car. The setting is post WWII Italy.

This is lots of fun. Everyone is just as they should be. Dmitri Pittas as Nemorino is lumbering and sweet voiced and does a mean "Una furtiva lagrima." He used to be an apprentice here.

Jennifer Black as Adina is arrogant, confused and sweetly sung, just as she should be. She was also formerly an apprentice. Her appearance is underwritten.

It is arguable that the true elixir is the appearance in this small Italian town of the American occupation army. It is the bold and daring Sergeant Belcore who starts the romantic ball rolling.

One of the more delicious bits of staging occurs when the girls of the town, except for Adina, hear the rumor that Nemorino is suddenly rich. They line up across the stage and start primping themselves to become more attractive to the new most eligible bachelor. In fact there is a lot of cute business in this production. Bravo.

I understand that Thomas Hammons as Dr. Dulcamara was a last minute rescue for the cancellation of John Del Carlo. Hammons has his opera buffa down cold. Instead of the elaborate wagon of other productions, the doctor appears disguised as an old woman carrying two suitcases with two carabinieri hot on his tail.

Great fun. Everybody left smiling.
Posted by Dr.B at 8:20 AM