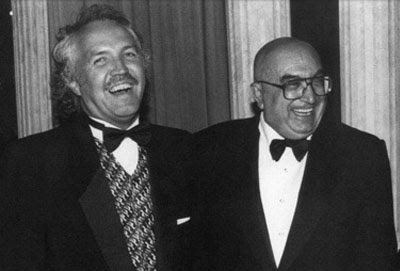 I am currently reading Lotfi Mansouri's memoir, True Tales from the Mad, Mad, Mad World of Opera.  Mansouri is shown above laughing with Donald Runnicles, probably from the days when they were the tag team running the San Francisco Opera.

Let's just say he names names.  One anecdote about a soprano whose mother comes to the house to tell her daughter of the evils of opera singing, isn't named.  But that's about it.  Jon Vickers, we are told, could and did recite long passages from the Bible when he was supposed to be rehearsing.  Renata Scotto didn't want anyone to stand within 20 feet of her.  Pavarotti liked cash donations.  Stuff like that.

When he gets to his chapter on opening nights at the San Francisco opera, I start having questions. He remembers the night when Otello started over 3 hours late, and how much the opera board members liked the time spent getting drunk waiting for the opera to start.  I would have thought, in fact always have thought, that serving booze at the opera was a money making idea.  I would have kept track of how much money each intermission generated and whether or not the money increased with the length of the intermission.  So exactly why is it that the number of intermissions keeps getting smaller?  Don't they like money?  And if overtime kicks in at midnight, why is it that the intermissions aren't timed to end the opera just before that?  One isn't allowed to ask these questions.

It used to be that things that went on behind the scenes at the opera made it into the newspapers.  Why doesn't that happen any more?  It is a fun book with lots of insider information.  I tend to find books annoying these days because they don't have a like button.  (Like)