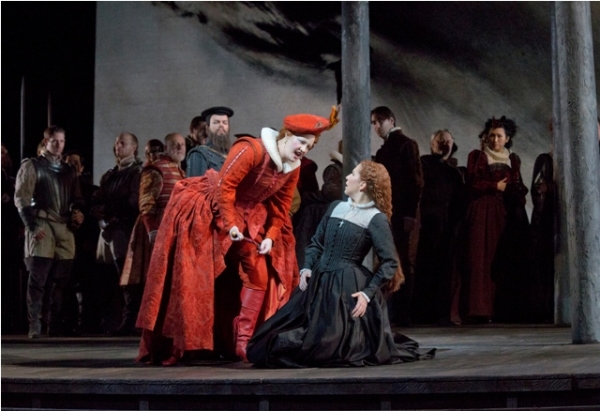 Today Donizetti's Maria Stuarda was simulcast in HD from the Metropolitan Opera. File under I didn't know that:  The role of Maria Stuarda was written for Maria Malibran, and premiered at La Scala Milan on Dec 30, 1835.  There was heavy censorship which Maria defied.

A very short history of Mary's life:  she was born on 8 December 1542 as the only legitimate child of James V of Scotland; became the reigning Queen of Scotland at 6 days old; married the dauphin of France at 5; became Queen consort of France at 16; widowed at 18; returned to Scotland to begin to reign as queen at 19; married her second husband, Henry Stuart, Lord Darnley, at 23; had a child who became James VI of Scotland and later James I of England; became a widow a second time at 24, then quickly married for a third time, and was imprisoned in Scotland that same year; at 25 she was imprisoned in England, where she remained for 18 years until her death.

Mary was Catholic, England and Elizabeth were Church of England, in fact established it, while Scotland was Presbyterian, I believe.  So Catholics generally, including probably Mary herself, believed Mary to be the legitimate monarch and Elizabeth illegitimate.

In the encounter scene in Act I, scene II, Mary calls Elizabeth a "vile bastard."  This is the main thing censored from the opera and reinserted by Maria Malibran.  The encounter between Mary and Elizabeth was entirely made up by Schiller.  In Act II, Scene II of the opera Mary confesses that she is guilty of plotting to overthrow Elizabeth.

So back to the opera.  Most strange was the portrayal of Elizabeth by Elza van den Heever (considered a notable graduate of the San Francisco Conservatory of Music, a list which also includes John Del Carlo and Catherine Naglestad).  She is a giant woman who at first tried to play Elizabeth nobly.  David McVicar insisted he wanted Elizabeth played in a very masculine, lumbering way.  You can see in the above picture that there are pants under her dress.  I liked her in this very significant role. 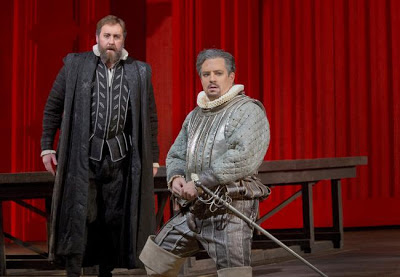 The Earl of Leicester, lover to both Elizabeth and Mary and sung by American tenor Matthew Polenzani, is a somewhat meatier role than what we are accustomed to hearing for him.  I liked it.  If we are to think he can manage any emotion besides sweetness, we need to hear him in a wider variety of roles.  This is a good start. 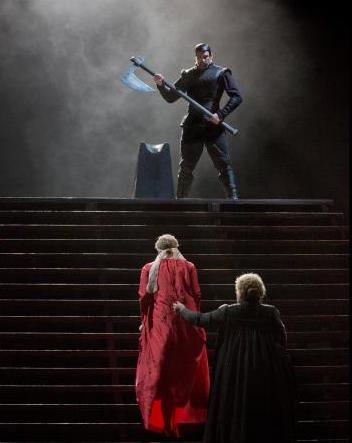 Which brings us to the magnificent Joyce DiDonato who sang Maria Stuarda.  This was a spectacular performance of a convincingly great opera due to Joyce.  Next we will have to declare her a goddess.

I listened to it on the French radio yesterday night. First I thought : you sure Di Donato as Maria Stuarda ? And I was convinced quickly that she could do it perfectly ! I especially liked the duett in the third act with the bass, it was a great deal of emotion although I had to ask myself twice about tuning... but we don't really care about that as long as we got guts and we got some ! Thank you for the pictures, it gave me some clues about how it looked. I noticed that Maria Stuarda is very heavy and long and Di Donato managed the lenght pretty well. I was crossing my fingers that she arrived at the final as fresh as possible and well she was fresh. Her reputation is not stolen.

Elisabeth was indeed very masculine even without knowing that the setting was made this way... So convincing she was !

If this plot is still confusing for you, remember Elizabeth also had a half sister Mary who was also catholic and immediately preceded Elizabeth on the throne of England. Mary of Scotland was a distant cousin.