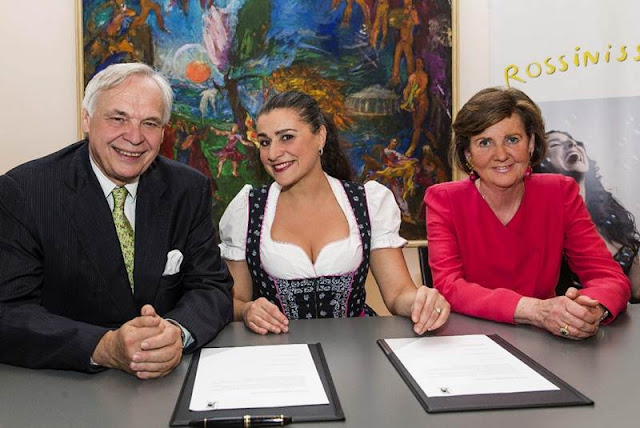 I will make every effort to stop reading like a Cecilia Bartoli fanzine now that the Whitsun Festival is over. Cecilia's contract has been renewed until 2016, because she has been wildly successful. A quote from the Salzburg Times:

The Whitsun Festival in Salzburg has set a new record of visitors and revenue. Cecilia Bartoli, a popular soloist and the artistic director of the festival, was particularly popular.

13,450 visitors from 43 countries attended the concerts and performances in Salzburg and bought tickets for 1.3 million Euros. The contract with the artistic director for the Whitsun Festival, Cecilia Bartoli, has been extended until 2016.

“I am very happy to be able to bring music and pleasure to Salzburg until 2016”, Ms Bartoli said. She has been artistic director as well as soloist of opera and concert in the four-day festival.

“I look forward to carry out many ideas at the Whitsun Festival, of which I have dreamt of for years. I am very thankful that such a huge and interested audience is so enthusiastic about us being adventurous”, Ms Bartoli said.

In 2012 the attendance was  10,520, and in 2011, before Cecilia took over, it was 7,600.  Next year it will be June 5 to 9, and will celebrate Rossini, including Otello and La Cenerentola.  Cecilia sang Otello just last year, but I don't think she's done Cenerentola for quite a while, or at least since I began blogging.  I don't know when the tickets go on sale.