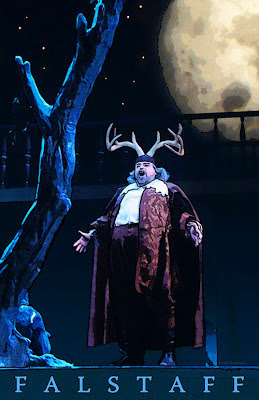 I am in Portland, Oregon, for reasons unrelated to opera and was asked out of the blue if I would like to go to see Falstaff at the Portland Opera.  This is the Verdi year, so everyone has chosen to do Falstaff, including the San Francisco Opera and the Metropolitan Opera live in HD next fall.

The only familiar name in the cast was Susannah Biller as Nanetta.  She spent the entire opera smooching with Nicholas Phan as Fenton, pausing briefly to sing a very nice aria toward the end.  She is progressing nicely in her career.

There were some pleasant features to the production. Falstaff, sung by Eduardo Chama, was played with more dignity than is usually the case.  When women smile at him in the street, he imagines them to desire him passionately.  The joke is that he is hugely fat.  At one spot he kneels on the floor before Alice and cannot get back up.  My favorite part of the production was the two story window in the Ford's house.  The servants carry Falstaff in the laundry hamper up to the second floor.  Then when they toss him out the window, you can see him descend into the Thames.

I have known people who love only Falstaff of all Verdi's operas, but I am not one of them.  I prefer more arias, even in comedy.  Nevertheless, the performance was enjoyable.
Posted by Dr.B at 2:48 PM

Saw "Falstaff" at the Met in 2001 (I think that was the correct year),and we were there because Dwayne Croft was performing as Ford. I don't recall who was scheduled to sing the title role, but the day of the performance it was announced that someone else would be stepping in -- Leo Nucci! He was terrific.