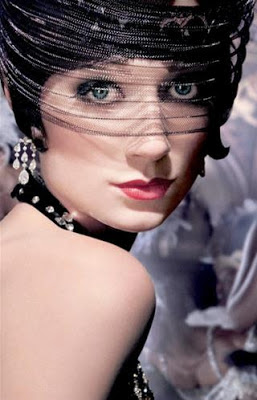 I was constantly distracted throughout Luhrmann's movie The Great Gatsby by the almost silent character golfer Jordan Baker, played by Elizabeth Debicki. She dresses the set so amazingly one hardly remembers one is supposed to be fascinated with Daisy.

In the movie everything is explained, something that was not true of the opera I reviewed here.  The story is about old money vs new money.  Gatsby imagines it's just about money, that if he has it, he has Daisy.  My house is as big as yours, and I have glitter and celebrities.  I think he realizes he isn't going to win before he sacrifices all for Daisy.

The only controversy that surrounds the film concerns the soundtrack.  He chose a rapper, Jay-Z, to provide music instead of traditional jazz.  I noticed a bit of Rapsody in Blue, but that was it.  In the opera they distinguished sharply between ambient music, music that is supposed to exist in the period, and background music.  I stopped caring when it served only as standard movie music.  I guess it bothers you only if you know.  It is not possible to not know once you know.