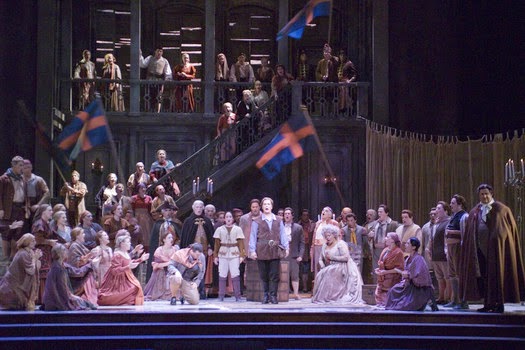 If you go all the way back to 1982, Un Ballo in Maschera at the San Francisco Opera starred Lucciano Pavarotti and Monserrat Caballe, but that was during the reign of Kurt Herbert Adler who ran the San Francisco Opera as though it were the greatest institution on earth.  Our cast wasn't quite that distinguished, but it was still excellent.  Dolora Zajick is still the greatest Ulrica.

I was very impressed with the Amelia Julianna Di Giacomo who had plenty of Verdi voice and Verdi style.

I have been puzzling over the credits listed on the programs.  If you look through the production photos from 1982 to 2014, you will see that the look of the scenery and costumes changes, but never do any of these changing productions, all traditional, claim to be a new production.  Who decides the credits and why has become something of an obsession to me.

The conducting was exemplary.
Posted by Dr.B at 12:13 PM

This is my all-time favorite classical opera (my favoritest favorites are all baroque), and I fell in love with Sumi Jo doing Oscar back in, umm, 1990 or thereabouts? Under Karajan / Solti, with Domingo and, umm, Barstow? I still have this recording on a pedestal, and I still judge a Ballo by its Oscar. Ridiculous, I know, but it's hard to come back from such a wonderful love affair.