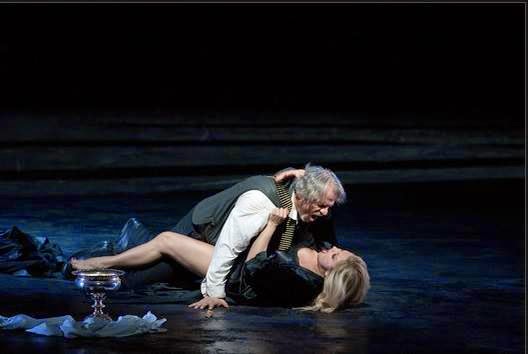 This performance of Verdi's Macbeth simulcast from the Metropolitan Opera is the same opera and the same production that we saw in 2008.  So why doesn't it feel like it?  Because it is about 100 times sexier.  For me Netrebko simply transformed the production.

There are at least two other Scottish operas besides Macbeth, the name you are not supposed to say aloud:  Lucia di Lammermoor and Handel's Ariodante.  There wasn't anything particularly Scottish in this production.  Perhaps the landscape might resemble a wooded part of Scotland.  It bothered me that there were no branches illustrating the movement of Birnam Wood.  In fact there didn't seem to be much relationship between the play and the set.

So much of this performance has been written about already that there is little I could add.  Anna was stunning, truly shocking.  There were lots of chairs.  I've never seen women carry their purses the way the witches did.  If there's a strap, don't they just hang it over their arm?  Perhaps they carried them like that so that they would be easy to open and let the lights shine out.  The witches had lights inside their purses.

There was only one thing I would criticize about Anna's performance--she is intensely self-confident for long stretches of the play and then is suddenly having nightmares about the blood on her hands.  Could we have seen this coming just a little?  Perhaps I am being nit picky.

Lučić was excellent, better than his Rigoletto.  There is a roughness to his voice that doesn't go with Rigoletto for me but was ideal for Macbeth. The entire cast was excellent, especially Rene Pape.

I was struck by how huge both the roles of Macbeth and Lady Macbeth are.  Luisi called the opera short, but we were out after 3 1/2 hours.  Except for the chorus, all the other roles are insignificant.  This is part of why the opera is so difficult.

I was pleased that Netrebko did not try to push into her chest voice.  In the really quite mad intermission interview she said that she would give herself 2 years on Lady Macbeth and then let her go.  I am hoping this is true.  There will probably be a DVD.

No one generates the sheer excitement and intensity that Anna Netrebko can.  She is the singer for our time.