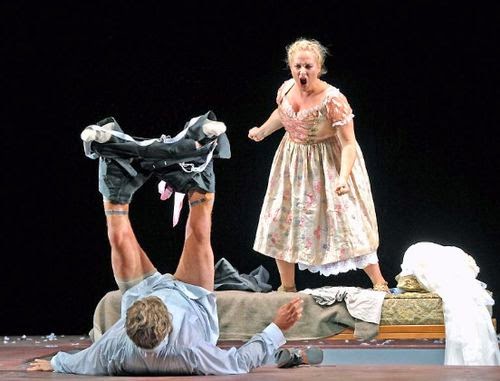 I know I've never seen/heard this opera before, but it kept sounding familiar.  Here a phrase from Rosenkavalier, then another, then Aminta hums the Ride of the Valkeries.  Aminta  is rehearsing L'Incoronazione di Poppea, but it sounds a bit more like Donizetti.

On Twitter there was an ongoing comparison of this opera to Don Pasquale.  I have only ever liked the Don Pasquale with John Del Carlo and Anna Netrebko, and I wasn't completely sold on this opera either.  It's too long.  There is too much of the Strauss style recitative on top of all the spoken dialog.  There are terse ariettas and the wonderful monologue at the end, and that's about it.  Speaking from the perspective of old age, a lot of young people picking on an old man isn't very funny.  In Don Pasquale the old man brings it on himself.  As I'm sure many of the current crop of television network producers know, comedy is hard.

It was a simple minimalist production with excellent cast members and fantastic performances.  When the theater troop first appears, they are all wearing costumes of opera singers: Bruhnhilde, Butterfly, Rigoletto, Otello and his Desdemona, Carmen, Violetta, etc. There is a swan just like the one from their Lohengrin production.

I felt that Hawlata was perfect for his role of Morosus.  Perhaps he understands better the need for legato in Strauss.
Posted by Dr.B at 4:06 PM