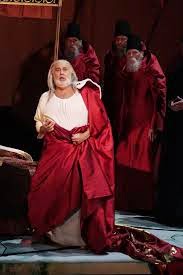 At our local movie theater we saw I Due Foscari by Verdi from the ROH, a new opera for me.  I didn't look anything up and realized that it is actually fun not to know what will happen. It was presented, I'm sure, at the request of Placido Domingo who plays the central character, the 89 year old Doge of Venice.

If memory serves, the Doge's Palace isn't quite this depressing.  The emphasis of the production is on unhappiness and political horror.  Jacopo Foscari, sung by Francesco Meli (heard live at Salzburg last summer in Nabucco, and streamed in Il Trovatore), has been found guilty of killing a member of the Donato family and is being exiled to Crete. Meli is handsome and dramatically intense.

Lucrezia's role (sung by Maria Agresta whom I have never seen before) is one long mad scene.  In line with modern psychology she murders one of her children at the end.  Agresta was interviewed in Italian, so I'm guessing she is Italian.  Her intensity was impressive.

Jacopo Loredano was sung by one of the great modern baritone villains Maurizio Muraro, seen previously in Barber of Seville both in San Francisco and at the Met, in Cosi in HD and to greatest effect in Manon Lescaut from the Royal Opera.  All he has to do is stand there glaring out at the audience, and you know he is up to no good.

Domingo continues to sing because he is still a wonderful presence on the stage, projecting a very wide range of emotions.  The character as created here seems unaware that most of politics goes on behind the scenes.  Remind you of anyone?  Never mind.

Our Verdi even in 1844 could create magnificent intensity in a wide variety of situations in a style that was uniquely his own.  I especially enjoyed the ensembles with the soprano.  The Venetians love Simon Boccanegra (seeing it there next week) but perhaps this opera makes them look bad.  That's the only explanation for its complete neglect that I can think of.

I believe "I due Foscari" was the first full-length opera performance for one of my favorite singers, tenor Carlo Bergonzi -- way back in 1951.

My wife and I were in Naples in November 2000 but unable to get tickets at Teatro San Carlo for any of the three nights we were in town, since all performances of "Foscari" were sold out. They later offered it for sale on DVD (which I bought, naturally), and it made me even more sorry I'd missed it. Not one of Verdi's best, but maybe because the libretto is a bit weak.