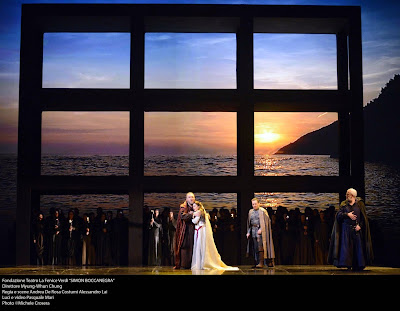 My operas seen in Italy are La Cenerentola and La Legenda di Sakuntala at the Rome opera, Aida in the Baths of Caracalla, Butterfly and Aida at the Arena di Verona and La Traviata near the Porta Romana in Florence.  None of them prepared me for the amazing experience of Simon Boccanegra at La Fenice in Venice.

We sat in expensive boxes which reduce the space available for the sound to enter.  In spite of this they could have been performing the opera inside the box with us, the acoustics were that good.  There was never any sense of over singing or covering by the orchestra.  I understand that the orchestra pit can be lowered to different levels to balance the sound.  This left these wonderful artists to fully express the emotions of this opera.

Remarkably, two of the singers participated in both Simon Boccanegra and I due Foscari, seen at home a few days ago:  soprano Maria Agresta and tenor Francesco Meli, both marvelous singers.  It is the warmth of the Simon character that elevates this opera to greatness, and Simone Piazzola succeeded brilliantly.

Remember Romeo and Juliet?  Feuding families is a common theme in Italian drama.  I have explained elsewhere that this has to do with the two factions:  Guelphs and Ghibellines.  In one opera(located in Venice) the enemy completely crushes the Foscari family for no apparent reason.  In the other (located in Genoa) while Simon dies, the others live on to a peaceful resolution.

Simon Boccanegra was a pirate before he became the Doge of Genoa.  His life as a pirate is evoked throughout the opera through the projection of films of the sea projected on a scrim at the back of the stage.  The waves could be seen moving, and occasionally a gull would fly by.  This more than compensated for the fact that everything else except Maria was black.

With one more exception.  At the last while Simon is dying, a woman appears in a white gown and bare feet.  She walks slowly over the floor and kneals down behind Simon.  As he breathes his last, she embraces him.  It has to be his dead wife Maria.  He speaks her name and dies.

The performance was intense from the first note to the last with a vivid expressiveness such as I have never experienced.  I can't help thinking that Verdi would approve.  I used to have a derrogatory remark to go with this opera, but now I think it is my favorite.

Thanks for the commentary on "Boccanegra," which prompted me to drag out and listen to my CD, with Mirella Freni, Jose Carreras and Nikolai Ghiaurov. It has perhaps the greatest Verdi bass aria ever, and I think this opera also sets the record for the longest gap in time between acts -- 25 years between the prologue and Act I.

I was very disappointed with the Met in HD version from a few years ago, primarily because Placido Domingo seemed sorely miscast in the title role (as a baritone!) and James Morris with that lovely aria -- he should have retired a decade ago!.

Glad to see you're enjoying your overseas adventures!