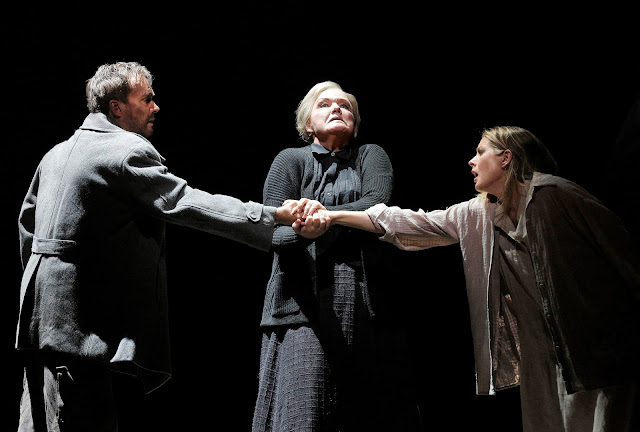 Jenůfa (yeh-NEW-fuh) by Leoš Janáček currently running at the San Francisco Opera will never be the same for me.  There are like rocks in this production.  We decided this must be symbolism, but I don't really do symbolism.

Jenůfa is about the lives of women as seen from the perspective of those who love them.  Because Kostelnička married a leader in the church, when he died she retained her position of leadership in the community.  After Jenůfa's baby is born, Kostelnička mentions that she has christened him.  That means she has that authority.  Grandmother Buryjovka had two sons, both of whom were married twice, and  Kostelnička is the only one from the second generation who remains alive and the only one without a child of her own.  Though she is only her stepmother, Kostelnička loves Jenůfa and wishes her to have a good life, one as good as hers has been.  All that happens arises out of this motive.

Jenůfa is a cheerful, beautiful young woman who is loved by both Laca and Steva.  Steva is a drunk and a layabout who has gotten Jenůfa pregnant, but who also inherits the mill from grandmother when she dies.  Laca is lonely and rejected.  Crucial to the plot is the fact that Laca accidentally cuts Jenůfa in the face.  In our production this was made to look particularly ugly.

When Kostelnička finds out that Jenůfa is pregnant, she knows that she must act to save this situation.  She tells Steva that he must marry Jenůfa, and he responds that he is engaged to the mayor's daughter.  He won't marry Jenůfa because she is now disfigured.  Steva knows that he is the father of Jenůfa's baby and still rejects her.

Kostelnička in the dead of winter takes the baby out and shoves it down through a hole in the ice.  She feels that without a baby Jenůfa has a better chance in life.  Instead Jenůfa is saved by the almost miraculous transformation of Laca who truly loves her.

I enjoyed the voices, including the two wonderful tenors.  These two men, Laca and Steva, look and sound close enough alike to actually be brothers.

But it is the women that give this particular performance its great power.  Important is the contrast in power between the characters of the sweet but weak Jenůfa and the strong and controlling Kostelnička.   Malin Byström acts and sings beautifully, but it is the astounding strength of Karita Mattila that carries the opera to its great heights.  She has always been one of the great singing actresses of opera, but here she has topped herself.  It is these moments when the art form of opera shows itself to us to be the greatest of all, that it towers over the emotional heights and depths of everything else without presenting the material in a sordid way.

The tension built all the way to the end due to the masterful conducting of Jiří Bělohlávek.  There was some unusual orchestration.

In my heart David Gockley retires with this wonderful performance.  I don't know what the rocks mean, and I don't care, but my heart has been penetrated.  Thank you.