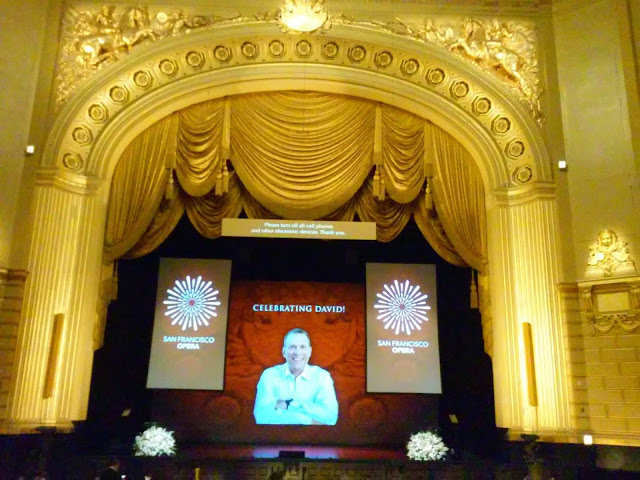 Many people were introduced at this point in the program.  The masters of ceremony were Frederica von Stade and Thomas Hampson.  We were reminded that Gockley had commissioned Heart of a Soldier for him.  Gockley commissioned about 45 new operas.

"News" from Nixon in China, John Adams, Edward Nelson, baritone, conducted by John DeMain.  Nixon had its premiere at the Houston Grand in 1987 and may be Gockley's best new opera.  It repeated in 2012 in San Francisco.

"Song to the Moon" from Rusalka, Antonin Dvorak, Renée Fleming, soprano, conducted by Jiří Bělohlávek.  2/4  This opera played at the San Francisco Opera starring Renée Fleming in 1995 with Charles Mackerras conducting.  Perhaps Renée also sang it in Houston.  I remember that I was sitting in the orchestra and looked up to see Renée singing from the top of a tree.

"I got plenty o' Nuttin'" from Porgy and Bess, George Gershwin, Eric Owens, bass-baritone, conducted by John DeMain.  This opera last played in San Francisco in 2009 with Eric as Porgy.  I loved it.

People who appeared on film on the screen at the center of the stage to express their respect for David Gockley included Joyce DiDonato, Placido Domingo (a fellow opera producer), and Cecilia Bartoli (now also an opera producer) who sang the starring roles in Barber of Seville and La Cenerentola with David early in her career.  It was nice to see her.  She was busy receiving the Polar Prize in Sweden.

"Son io spirito" from Mefistofele, Arrigo Boito, René Pape, bass, conducted by Nicola Luisotti.  Pape who is in town for Don Carlo is the only person on the program whose career was not significantly influenced by Gockley.  Apparently, at the end of the aria there was supposed to be whistling which didn't work.  Other people got this while I completely missed it.  In this opera the devil whistles.  So instead René made funny gestures.

"Bill" from Show Boat, Jerome Kern, Patricia Racette, soprano, conducted by John DeMain.  Patricia whistled before her song.  Someone in the audience gave her a wolf whistle.  Lots of laughter.  The song was nice.

"N'est-ce plus ma main?" from Manon, Jules Massenet, Nadine Sierra, soprano, Michael Fabiano, tenor, conducted by Nicola Luisotti.  This is the seduction scene from Manon and ended with a lot of smooching.

"I can smell the sea air" from A Streetcar Named Desire, André Previn, Renée Fleming, soprano, conducted by Patrick Summers.  I'm going to have to reconsider this.  This opera was commissioned by the San Francisco Opera and premiered with Renée Fleming in 1998 where the composer conducted.  I have a film of it somewhere.

"Ah!  Je vais mourir... Adieu, fiere cite" from Les Troyens, Sasha Cook, mezzo-soprano, conducted by Patrick Summers.  Sasha did a very respectable job with this in spite of the last minute fill in.  This opera was one of the highlights of David Gockley's tenure here.

Talking, followed by the ending.

This was an extraordinary gala uniquely tailored for the man being honored. At the end of the program it was announced that David Gockley would continue his affiliation with the title General Director Emeritus.

As far as I know, there is no archive for the Houston Grand Opera.  Perhaps they could consider creating one.

See also here and here.  I went overboard with this, but I was interested in Gockley's relationship to the repertoire.
Posted by Dr.B at 7:36 PM

a spectacular evening. the range & joy of the music making was something special. at the very end, they've done curtain calls, Gockley stepped to the apron and asked, "any questions?" laughter and applause, us all on our feet, house lights up....