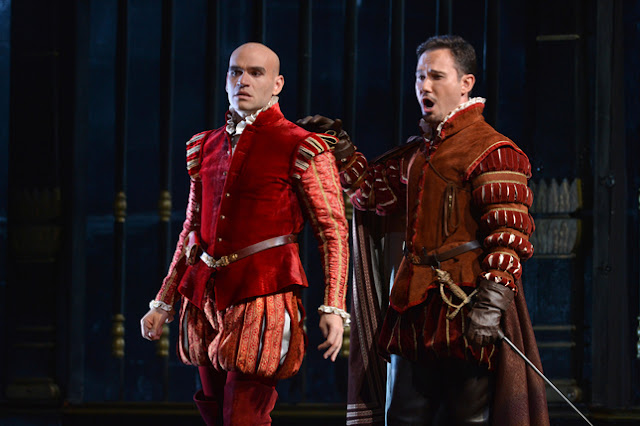 This is such a complex opera that it's hard to cover everything.  I am speaking of Verdi's Don Carlo at the San Francisco Opera.   It has two plots which is part of the reason it is so long.  One plot is about the fact that Elisabetta and Carlo meet in France, think they will marry, fall in love and immediately find out she will marry Carlo's father.  She immediately follows her fate while Carlo obsesses over her all the way to the end.

The second plot concerns the fact that Spain in the time of the inquisition has conquered Flanders, a protestant country.  The Roman Church at this time imagines that if it kills all the protestants, it will be left with a catholic world.  Power in Spain is held as much by the inquisition as by the king.  Many were also being killed in Spain.  Rodrigo and Carlo side with Flanders which is their downfall.

There are a few oddities in this production.  In the so-called "Auto-da-fé" scene no one burns.  Instead men in tall coned hats are raised into the air.   When Philip sings that his wife doesn't love him, he is alone in bed.  Eboli is seen going into the prison and rescuing Carlo, a first for me.  At the end Carlo is taken away by guards and not saved.  I found the production acceptable.

Ours was the only performance with Furlanetto instead of Pape.  Furlanetto's voice is starting to show its age, but he still brings a powerful emotional performance.

I felt that Ana María Martínez was a bit light for Elizabetta, but her Act V aria was magnificent.

We were also pleased with the Eboli of Nadia Krasteva.  I saw her previously as Preziosilla in La Forza del Destino.

I was surprised to hear that both Michael Fabiano and Mariusz Kwiecień have big voices to bring to the table when required.  For this opera they would need to coordinate their expression more fully with one another for complete success.

I get to carp if I want but it would be nonsense to overdo it.  It was a successful evening with a large audience.  What do opera audiences really want?  Great Verdi and Wagner.