Manon at the San Francisco Opera 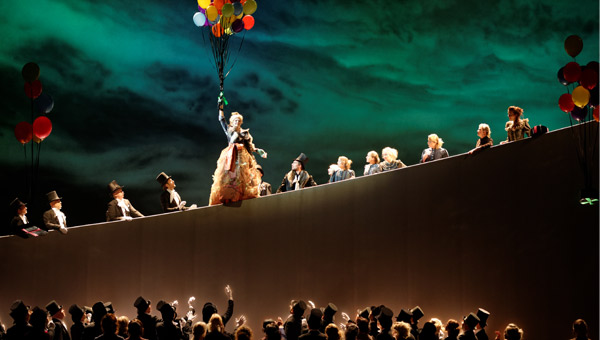 Last night was the fourth performance of Massenet's Manon at the San Francisco Opera.

I find it helpful to contrast the plot of this opera with Puccini's Manon Lescaut.  To begin Massenet's heroine arrives in town on the "coach" on her way to the convent.  In our production she looks like Eliza Doolittle.  Puccini is similar.  In Puccini Lescaut is Manon's brother while in Massenet he is her cousin.  In both versions there are rich old men who want Manon.  In our production virtually all the characters are introduced in the first act but no effort was made to clarify who they were and how they relate to the story.  There was just a lot of meaningless milling around until Manon and des Grieux arrive.

In Massenet we see des Grieux and Manon living together and see that their separation was caused by the elder des Grieux kidnapping of his son.  In Puccini we go immediately to Manon living with one of the two old men as the result of her brother's dealings.  And when she attempts to escape her keeper, he has her arrested and shipped to America.

Massenet focuses on the relationship between des Grieux and Manon, a much more romantic and appealing approach.  After des Grieux's departure, Manon takes up with one of the old men.  The staging of Manon's gavotte is the highlight of the production.  She is seen high above the stage holding a large bunch of balloons and then floats down to the floor.  Fun.  I was worried she would have to sing from the flies, an acoustic dead spot.

When des Grieux is kidnapped by his father, he goes into the religious life and orates on the meaning of life.  This allows for the sexiest scene in all of opera:  the scene at Saint-Sulpice.  Manon has not forgotten des Grieux and goes to the church to seduce him away from his religious calling.  She succeeds.  "Isn't this my hand?"

The couple get involved in gambling and are arrested for cheating.  They have created their own fate, far less depressing than Puccini where they both die in Louisiana.

This performance was saved by music.  Our lovely French conductor kept the action moving and supported our romantic pair.  Ellie Dehn handled well all the changes of style of her role and sounded lovely.  Michael was intense and exciting as always.  His voice fills our house with ease.  Together they made a very romantic couple and brought the audience to applause over and over.  I loved it.