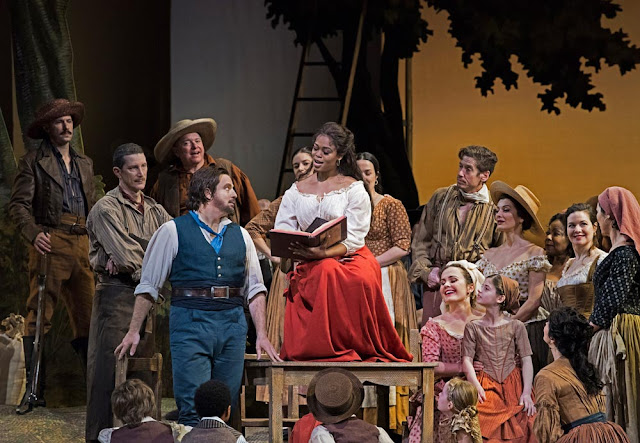 We saw in HD today the excellent Bartlett Sher production of Donizetti's L’Elisir d’Amore.  I've seen this production before and know that the top hat worn by Adina proclaims that she is the landlord of this country property seen at the beginning of the opera.  Matthew was Nemoriino the last time.

Something happened this time that hasn't happened for me:  in the second scene in town before Dulcamara arrives Adina and Nemorino tease and play with one another.  Clearly she already has eyes only for him.  What we with our egalitarian perspective don't notice is that penniless Nemorino is far too much lower in class for land owner Adina.  I felt tremendous rapport between Pretty and Matthew in this performance, and it changed the dynamic of the opera for me.  Pretty is charming and beautiful.

This is the sixth time I have blogged about this opera, and I think I have enjoyed this one the most.  It was extremely cheerful, and I think I prefer it that way.  The prompter's arm was seen as he struggled with the elixir. Lidia Bastianich appeared in the intermission to tell us about her new pasta dish called "pasta d'amore."  Food and opera are her great loves.  She did standard opera bragging by telling that her first live opera was Aida at the old Met with Leontyne Price and Franco Corelli.  Dulcamara ate the pasta on stage.