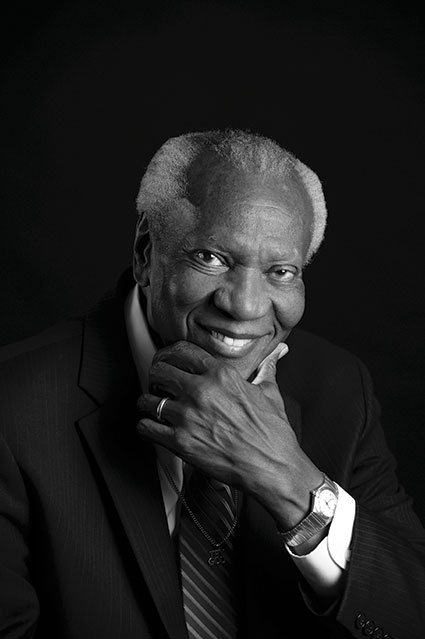 The great operatic bass-baritone Simon Estes appeared in recital here in Sacramento at the Sacramento State Capistrano Hall recital hall.  I remember him best from his appearance on television when Leontyne Price gave her farewell performance in Aida at the Met.  He will be 80 in March.  He sang seated and alternated his groups with a few numbers by Omari Tau, a local baritone.  Mr. Estes was accompanied by Judi Goble, pianist.

He opened with Malotte's "The Lord's Prayer."  He then performed two operatic arias:  "Il Lacerato spirito" from Verdi's Simon Boccanegra and Zacharia's Prayer from Verdi's Nabucco.  They were both nicely done.  This group ended with "Precious Lord, Take my Hand".

Omari Tau then came out with the Sacramento State Opera Theater Chorus, Virginia Electra, pianist, and performed "Ain't Gonna let Nobody Turn Me Around".  Omari and Virginia then performed "This Little Light of Mine" which I prefer at a slightly faster tempo.  Omari and the students kept their selections in tune with Mr. Estes' selections.  This is Omari Tau's theater style.   Next Thursday he will perform Stravinsky's L'Histoire du Soldat here in this same performance space.

Simon Estes has had a glorious career, singing in all the great houses.  It is satisfying to hear how much of his fabulous vocal instrument still remains.  The middle group were spirituals.

The Opera Theater chorus sang something from Ragtime, followed by Omari Tau in "Make Them Hear You' from the same show.  The Broadway theme provided an introduction to these great Broadway songs sung by Simon Estes:

He closed with "Without a Song" by Vincent Youmans.