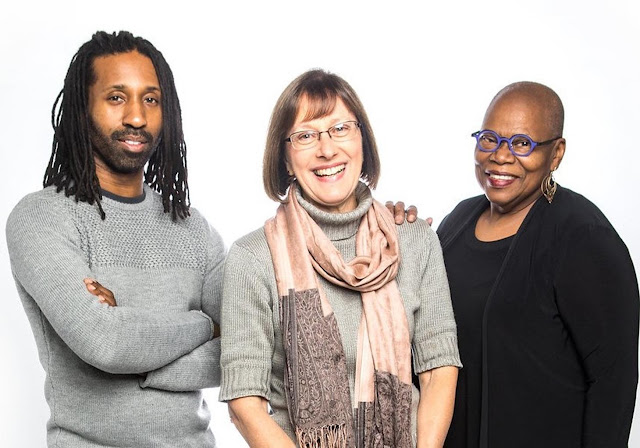 Today was Episode II The Spirit (60s - 80s) of MôD Artists trilogy on Oak Park, a neighborhood of Sacramento informally bounded by U.S. Route 50 to the north, Stockton Boulevard to the east, the South Sacramento (99) Freeway to the west and Fruitridge Road to the south.  Episode I was reviewed briefly after a piece by Omari Tau called "The g word."  Which word this is I do not know.

This time they were assisted by Sacramento Ebony Chorale who performed "My soul's been anchored in de Lord," arranged by Glen Jones and included a wonderful soprano soloist.  When it came their time to sing, they rose up suddenly behind us.

The program alternated film segments and musical numbers.  I don't think I was aware that the early twentieth century was the worst period for racism in America.  They talked about racial contracts in property deeds, something that apparently didn't exist in Oak Park.  Urban renewal was mentioned.  I am old enough to remember seeing Old Sacramento before urban renewal when many people lived there cheaply.  No thought was given to where they would move.

Pieces performed by the core trio of MôD Artists are:
Another supporting artist was Lawrence Dinkins who performed his piece "Change."

They finished with "Lean on Me" by B. Withers.  Sacramento Ebony Chorale joined in.  I wanted to sing along.