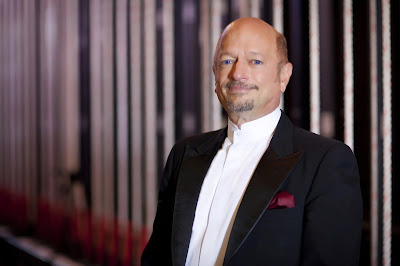 For the last several years I have been attending performances in Davis of the American Bach Soloists led by Jeffrey Thomas.

This concert was billed as a performance of Claudio Monteverdi's Vespro della Beata Vergine or The Monteverdi Vespers.  It turned out to be the named piece interspersed with pieces by Giovanni Gabrieli who was organist and composer at San Marco in Venice from 1585 to 1612 when he died.  Claudio Monteverdi was maestro di cappella at San Marco from 1613 to 1643 when he died.  Both of these composers are major figures in the transition from Renaissance (prima pratica) to Baroque (seconda pratica) musical styles.  The Vespers were from 1610 before Monteverdi moved from Mantua to Venice.  It was submitted as a job application, rather like Bach's B minor mass  Whether Gabrieli and Monteverdi knew each other is not known, at least by me. Renaissance style comes primarily from the Netherlands--in fact Gabrieli studied with the immigrant Orlando di Lasso--while Baroque is basically a native Italian style.

For my ears the Italian music sounds a lot more ornamented than music from the Netherlands, especially in the Monteverdi.  I heard at least one trillo, the Monteverdi ornament that sounds like repeated notes. Vocal solos featured accompaniment by continuo alone, small organ and theorbo in this concert.  Use of continuo is supposed to be the hallmark of the Baroque.  At least that's what I thought until I learned that it continues on into the bel canto.  Continuo represents the concept of chords with a certain amount of extemporization.

San Marco is very roomy, and musicians could move around unobtrusively.  The Davis church is not.  Members of the ensemble stood up and rearranged themselves between virtually every two numbers

In ecclesiis, C78 (1615) Giovanni Gabrieli.  This is a chorus accompanied by orchestra.