Alice Coote: My Life as a Man

This is an article borrowed from the Guardian: 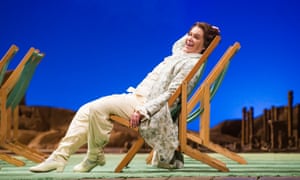 I get paid to flatten my breasts, dress up as a man, make love to other women, all the while singing athletically elaborate music without a microphone. This is my day job in rehearsals, and thousands of people around the world watch me do it in performance several nights a week.

I am an opera singer, and for those of us with the middle and lower range voices – mezzo-sopranos and contraltos – this is a normal part of the job.

Women have been “playing” men for a long time. Since the 17th century in opera and even earlier in the theatre, it has been part of mainstream entertainment. Before then women acting or singing, playing either women or men, was seen as a form of prostitution, and females remained voiceless – “Let women keep silent in the churches” (I Corinthians 14.34) – and men were castrated in order to sing the higher notes, a price I am grateful to not have had to pay! Baroque opera was a gender free-for-all; in theatres during the Restoration it was fashionable for plays to have at least one role for actresses in male clothes. In opera, virtuoso singing, vocal pyrotechnics and affecting singing are the thrills, not realism or plot believability, so it ultimately doesn’t matter which gender is singing.

Some of the most iconic roles I am lucky to have been able to perform are so-called “trouser” or “ breeches” roles. There are at least 70 of them in the repertory, and they are by no means limited to baroque opera. Composers from Handel to Humperdinck found in the female voice a quality that illuminated their male characters, while the thrill of the sexual ambiguity and also the beauty of the sound appealed to audiences. Some of the most famous roles are Handel’s young prince Ariodante, or his king Xerxes, Mozart’s pageboy Cherubino, Massenet’s Prince Charming in Cendrillon, Hänsel in the fairy tale by Humperdinck - right up to the young knight Octavian in Strauss’s Der Rosenkavalier, written only a century ago.

What, then, is the great curiosity and fascination in watching someone assume the opposite gender and be something they are not? Perhaps it’s because it is the biggest challenge an actor can attempt; perhaps also it’s because it is a means to see gender explored and “interpreted” physically, displaying some of its qualities in sharp relief.

To sing with a female voice and act with a male persona requires decades of dedication and love for the craft and creative process. I have to separate my mind from my body and imagine myself in one with a different gender, structure, sensations, qualities and desires. I have to change my balance and physical movements from the minute to the large. I have to edit my very approach to the world I find myself in and make my interactions and responses male. This last task is particularly sophisticated, subtle and – perhaps – elusive.

I try to sing in a way that is filtered through the mindset of the male character I am playing. This may mean I choose a sound colour that is drier or more taut or less emotional in some senses if the character seems to require it. But I often decide that the vulnerability of the character (male or female) means I need to show the emotion in my voice in exactly the same way, and yet when I am playing a man it still seems to come out of me in a different quality of tone and phrasing from when I am playing my own sex. It’s an odd subliminal phenomenon.

And at the end of the day at least I can take my costume off and return to the certainty of myself and my own gender... Or can I? And which part of myself am I returning to? There have, I confess, been several occasions over the years when come tea break I have walked out of the rehearsal room straight into the men’s toilets. For the record I have immediately scuttled out blushing and shocked into reality when I am confronted by the apparatus on the walls. But it’s confusing ...

Having been stepping into male eyes for two decades now for around 70% of my working life I, by necessity, have had to dwell in a place where my mind feels increasingly separate from my sexual body. It has made it complex for me to return to daily life as a woman: I feel in sharp relief the way a heterosexual, bisexual, homosexual or transgender woman’s personal and public relationship power is utterly unlike that of a heterosexual, bisexual, homosexual or transgender male’s expectations and power relationship to the world. Cross-dressing on the stage reveals less to me about gender than it does power.

Opera has always dwelt in this complex and confusing state. Transitioning transgender males and females have to make many decisions about the level of femininity or masculinity they want to adopt just as I choose – depending on the role, production and costume – how “male” I want to present myself in emotional character, psyche and physicality. There is a huge spectrum, and yet I have always refused when a director or designer has suggested I wear a false penis under my costume to make myself feel “more male”. I feel that it would only make me feel less so. The part of me that can imagine being male with all those qualities and sensations physically would be betrayed and undermined by the indignity of fake genitals in my trousers. The male part of my real self would feel insulted!  [She does not name names.]

Audiences sometimes believe I am actually a man with a high voice. Some directors find it preferable not to even try to create the illusion of maleness, and want me to play a transparently “female” male, a choice which actually throws up many more nuanced and interesting questions than those faced by a female actor playing as close to a male as is possible.

Gender-bending sometimes seems to sexualise the performer. I have been on the receiving end of many forms of sexual fascination in response to my trouser-wearing in opera, mainly from women and gay men. It may be that I and other singers in similar roles appear stronger or more powerful or more sexualised because of our awareness of how to use our bodies and play with the idea of male sexuality – and that empowerment elicits excitement. In stepping outside our gender we also step beyond the social rules to which so many of us adhere, and this “transgression” is thrilling, even sexually liberating, for an audience.

I in turn have had to question my own femininity and what it consists of, both for me personally and for others, and to ask which part of me defines my female identity, and in what degree. Is it my body, my mind, my chromosomes alone, or the conditioning of society?

More crucially when I am alone and not relating to men or women, do I define myself as female or as a rather more neutral being? Just because I have a female body is that the largest part of my identity?

After two decades of male transformation I don’t feel it is. I feel the part of me that floats between physical and sexual aspects of my life is the truest part – a neutral space not limited by binary concepts that make us either male or female. I have made being this “alternative hero” my work for two decades in a world where it is still prevalent in cultures dominated by ancient religions that women are considered lesser in their very essence than men, and they still have no voice. It is a privilege and joy to step outside my own gender, and let the neutral in me – and in us all – sing.