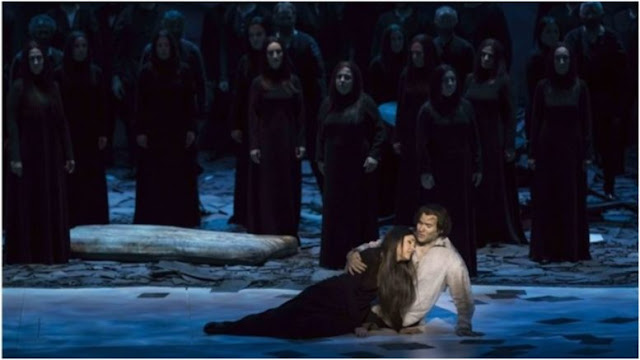 Verdi's Il Corsaro is on a libretto by Francesco Maria Piave which is based on Lord Byron's poem The Corsair.  A corsair is a pirate.  Other characters have period costumes in colors, but Michael is relatively modern and purports to be the poet himself.  He doesn't even remind me of Lord Byron.  It's more the minimalist black and white.  I don't generally find productions which are conceptually split, here split between period and modern, to work at all.  There are occasional cute images, but nothing that explains the story.  Apparently two women are in love with the pirate.  It ends as only an opera can.  Poison.  Cliffs.  That sort of thing.  In this production Medora dies and then gets back up to make a three person tableau.