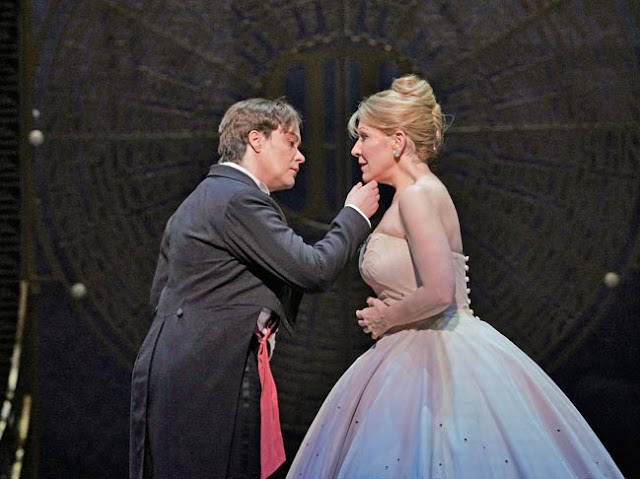 Every year I rank the Met Live in HD simulcasts.  It's not easy since the quality of the product is so high.

This season included the Sonya Yoncheva film festival:
Luisa Miller was the most difficult for her, but I enjoyed her Tosca best.  She and Placido Domingo seemed to have great rapport in Luisa Miller.

This season we had the grotesque James Levine scandal with his name disappearing from performances.  Anna Netrebko appeared in the Met season but not in an HD simulcast.  There was no Jonas Kaufmann this season, but most of the rest of my favorite current tenors made appearances:
And now for the ranking.

10. I liked the idea of The Exterminating Angel by Thomas Adès, and I even liked some of the details, but I could not get past the hideous screeching. Knowing vocal classifications is a minimum requirement for opera composing.

9. Luisa Miller by Verdi comes ninth for me, since I don't really love the opera.

8. Semiramide by Rossini was very unusual--assertive and intense.  I'm used to a more low key mood for this opera.  It also suffered for me because of the recent live stream from Munich of this opera with Joyce DiDonato.

7 Die Zauberflöte Mozart was in German and uncut in a repeat of the Julie Taymor production, with an excellent cast, but I didn't get very excited.

6. L’Elisir d’Amore by Donizetti was OK, but this is its sixth outing for me since I started blogging.  In spite of that I liked this performance very much indeed, especially Pretty Yende and the light-hearted atmosphere.  Perhaps it's a comedy after all.

5. Norma by Bellini featured a new, very naturalistic production which attempted to do a better job than usual of explaining the plot.  It also featured Joyce DiDonato as Adalgisa.  I'm still stuck on Cecilia's version.

4. La Bohème by Puccini.  It's hard to know where to put La Bohème.  It always seems to work.

3. Tosca by Puccini was a new traditional production with a fabulous cast.  I especially liked Yoncheva.

2. Cosi fan Tutte by Mozart.  This opera needs something to make it work.  Otherwise it's just beautiful music accompanying a horrible story.  The point is supposed to be that women are fickle, but this production made it seem to be more about men behaving badly.  Maybe in revivals they will diminish the frantic circus activity a bit.  Pompous asses in naval officer uniforms made all the difference.

1. Cendrillon by Massenet.  This was a fabulously cast, spectacularly mounted fairy tale opera well worth seeing.