Today we were treated to the first production of Massenet's Cendrillon ever to appear on the stage of the Metropolitan Opera.  We begin with a French conductor, a French production and a Frenchman to speak the only spoken dialog heard in the opera.  The rest of the cast is not French but is nevertheless spectacular.

The story divides into three contexts:  1. The home of Pandolfe, his wife Madame de la Haltière, his daughter Lucette and his two stepdaughters.  2.  The palace of the King and his son Prince Charming.  3.  A dream-like fairy land populated by the Fairy Godmother and her minions. 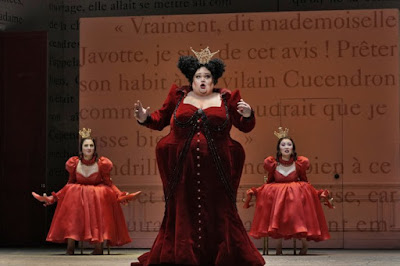 It would be difficult to imagine a better wicked stepmother than Stephanie Blythe.  When she is on the stage, you hardly notice anyone else.  She describes her ancestry, and it includes numerous individuals who wouldn't normally be expected to have descendants:  monks, abbesses, nuns, mistresses, etc.  Hmm.

Kathleen Kim was also perfectly cast as the Fairy Godmother.  She sang beautifully and was light on her feet like a being made of fairy dust.  In this story she first provides a carriage and the outfit for the ball.  She tells Cendrillon she must leave the ball by midnight.  Then later in the opera she creates a mystical reunification of Lucette and her Prince before the glass slipper ceremony at the end.  All the traditional elements are there.  These parts of the opera were absolutely magical.

I wanted Lucette to return to the place in her house where she hid the slipper she brought home from the ball and was very disappointed when this didn't happen.  Twice lines of women in red dresses paraded for Prince Charming, first to woo him and then to try their feet against the found slipper.  I took this for the required French ballet. 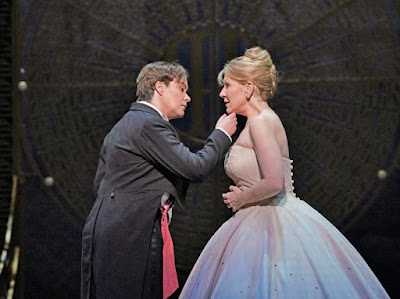 Joyce and Alice were the perfect Cendrillon and her Prince Charming, setting the mood and singing beautifully together.  The singing and acting were marvelous, and the production created exactly the right fairy tale mood for this beautiful opera.  It was lovely to see so many children in the audience.  Massenet's opera truly seemed to be made for children.
Posted by Dr.B at 8:25 PM