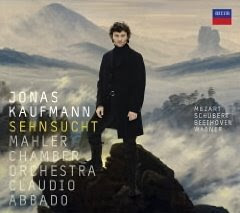 Jonas Kaufmann's next cd, Sehnsucht, already out in Germany, is entirely in German. His German singing is as good as it gets. If you listen to him talk here, you hear that he is clearly a tenor. Gee, I love him.

The interview I used to show here is removed.

They mention that he speaks 5 languages and ask him to sing something in Swiss German. He says he can't think of anything. They ask him if he could sing something, and he talks a long time about how much he has to warm up before singing as a way of getting out of it. He says he warms up in the morning just to make sure everything is working correctly.
Posted by Dr.B at 11:27 PM

Hi there - Sorry if you already know this, but you can order the new Jonas CD from the German amazon site (amazon.de, I think). I don't know German (I think you do), but I was able to easily navigate through and all my US account info was there. It arrived in under 2 weeks. It was an impulse purchase, but I didn't want to wait for the US version! The liner notes are all in German, so I don't understand them, but the music is great! :) They also have a deluxe version with DVD that apprears to be region 0.