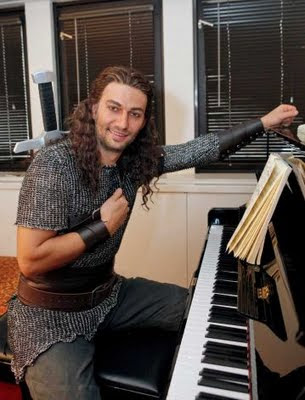 Here's an AP article about Jonas Kaufmann's appearance at the Metropolitan Opera as Siegmund:

NEW YORK (AP) — Jonas Kaufmann knew he was taking a risk when he agreed five years ago to sing the role of Siegmund, the doomed hero of Wagner's "Die Walkuere," in the Metropolitan Opera's new production that opens next week.

Five years is about how far in advance top opera singers like the German tenor get booked by leading houses. The offer for Siegmund came from Peter Gelb, the Met's general manager, after he heard Kaufmann sing another Wagner role, Parsifal, in Zurich, Switzerland.

"It's an insanely long time," Kaufmann exclaimed in a recent interview before the start of the day's rehearsals. "It's a contradiction to art, because what an artist usually does, he follows his instincts, and the more he goes into what he is keen on doing at that moment, the more enthusiasm or passion is in it.

"If you would ask a painter to choose the colors now that he's going to paint in five years, I mean of course he would refuse. What is that idea? It's so weird. But we are forced to do that, to think over where we'd like to go, what we guess our voice is capable of doing in this amount of time."

Meanwhile, with the "Walkuere" contract tucked away, Kaufmann continued building a career that now, at age 41, has made him perhaps the most sought-after tenor in the world. With a sturdy sound that can handle melting pianissimos or full-voiced high Cs with equal ease, leading-man good looks and fluency in multiple languages, he has been able to triumph in a wide range of roles.

There was Cavaradossi in Puccini's "Tosca" in London; Des Grieux in Massenet's "Manon" in Chicago; Wagner's "Lohengrin" in Munich and Bayreuth; Massenet's "Werther" in Paris. He's also an accomplished performer of German songs, giving recitals and recording one of the touchstone works in that repertory, Schubert's "Die Schoene Muellerin."

Now here he is, preparing to make another high-profile role debut in the second installment of Robert Lepage's new staging of the "Ring" cycle, a production filled with operatic stars but dominated by the set, a 45-ton metal structure run by a computer.

"We just have to keep our fingers crossed that the machine is doing its job," Kaufmann said of the Lepage contraption. "Unfortunately, there's this little worry that's around because it has happened that it hasn't worked perfectly."

Siegmund, son of the god Wotan, has an unusual story line for an operatic hero: He enters into an incestuous relationship with his twin sister, Sieglinde.

"Obviously, it's forbidden, but it's not our fault," Kaufmann joked during a recent panel discussion about the production. "We've been separated, we didn't know who we are, we met that night in this hut in the middle of nowhere. And there we are!"

Siegmund dies at the end of the second of the opera's three acts. But Kaufmann said that even though the role is not particularly long, learning it was harder than he had expected.

"Especially at the beginning of Act 1, it's always bits and pieces, two or three phrases at a time. I don't want to say it was frustrating, but it was close to it. For a while I thought, 'Am I getting old or something?'"

But he trusted his usual procedure for learning new parts. "There's a natural process with me," Kaufmann said. "Once you've sung it through, with the score in your hand, three, four times maybe, the whole thing starts ringing in your head.

"And obviously you have tons of rehearsals to double check if that was correct. Because it's so much easier to fix it for eternity when you learn it combined with staging. The text, the singing and the visual — that puts it into a different place of the brain."


The finale to Act 1, an extended love scene for the twins, is one of the most rhapsodic passages in all of Wagner. Kaufmann said he and soprano Eva-Maria Westbroek, making her Met debut as Sieglinde, are aiming for what conductor Herbert von Karajan called "controlled ecstasy."

"We have to convince the audience, and even ourselves, that we are out of control, that we are driven away by all those emotions," he said. "But still deep inside there is something that controls it and can unplug it if it's too much.

"To always be at this edge, this borderline, that's really the interesting bit. And that gives you also the possibility to fill up the words and the singing with your real emotions, because you're feeling exactly what you're saying at this very moment. That makes it credible. Without going over this edge, without really falling in love with your partner, without really being in tears, and no longer under control of your breath," Kaufmann said.

The role of Siegmund sits low for a tenor, something that Kaufmann said colleagues warned him about.

"They said, 'Oh you have to wait until you lose your high C,'" he recalled with a chuckle, "'because otherwise you're going to ruin your high notes.' And I said, well, in my theory this would be never, because it's not that I'm estimating in the next three years to get rid of my high C."

To illustrate how low the vocal line descends, he sings the phrase that concludes Siegmund's soliloquy midway through Act 1: "Tief in des Busens Berge glimmt nur noch lichtlose glut." ("Deep in the recesses of my heart only a flameless fire still smolders.") The final word "glut" is sung a full octave below middle C.

"You have to trust your voice," he said. "If you try to sing like a bass, if you squeeze it and try to project it, it actually won't carry."

Early in Kaufmann's career, Siegmund wouldn't even have been a possibility. He started out in 1990's sounding "like a typical young German tenor with a very light, white voice."

As for his lower register, he said, "I had none at all. I think F or F sharp (below middle C) was the lowest note I had. Under that it was only hot air."

He also found that when he tried to sing out to express emotion, "I lost control. My voice just wasn't reliable."

That led him in 1995 to a teacher, American baritone Michael Rhodes, who had moved to Germany after World War II.

Rhodes said in an email reply to questions that he instructed Kaufmann in the use of a technique he calls "sbadigliare," from the Italian for yawning, which he himself had learned from the great baritone Giuseppe De Luca.

"Sbadigliare requires one to relax the whole body and really yawn — an involuntary reaction," Rhodes said. "In this state of relaxation, the voice is completely free, as Jonas's is."

Kaufmann said that after he had studied with Rhodes, many colleagues who knew him from before predicted he would quickly come to ruin. "They said, 'Maybe another two to three years, maybe five, but then it's over.' Because everyone expected me to overdo, to artificially darken the sound. It was impossible to believe that this would be my own voice."

Instead, his career started to take off. Kaufmann's relationship with the Met began in 2000, when he auditioned for music director James Levine in Munich. The following year he was offered contracts for his debut season in 2006 (that five-year lag time again), as Alfredo in Verdi's "La Traviata" and Tamino in Mozart's The Magic Flute."

Eager to have Kaufmann return, Gelb arranged for the next couple of seasons for him to fit in a few performances in between his other engagements.

"I didn't have enough time to learn a production," he said, "so we always scheduled "Traviata," because that was the thing I knew. They could just throw me in."

Finally, after 14 Alfredos, last spring Met audiences got to hear him as Cavaradossi and as Don Jose in Bizet's "Carmen." Now, after Siegmund, there are other roles lined up: Gounod's "Faust" next season, and after that reportedly a new "Parsifal" and a "Werther."

Elsewhere, he'll add Aeneas in Berlioz's "Les Troyens" for Covent Garden next season, and plans to expand his Verdi repertory, working toward "Otello" through Manrico in "Il Trovatore" and Don Alvaro in "La Forza del Destino."

One thing Kaufmann won't be tackling for now is more Wagner. The roles he hasn't yet sung — Tristan, Tannhaeuser and Siegfried — are widely regarded as ultimate voice killers.

"As soon as you put one step into this repertory, all the theater managers immediately try to offer you everything up to Tristan, because there's this desperate need.

"If I have the chance to be able to sing for a long time, then hopefully I'll be able to do those things later," Kaufmann said.

"But I don't want to get into the hit books of history as one of the youngest Tristans ever, and who lost his voice right after."

Thanks for sharing this fun interview! This is the first photo I've seen of him in costume for Siegmund and I find it hilarious. Is it all right with you if I put a link to this post on my Twitter feed?

Thanks! Prepare for a deluge (or at least an isolated shower) of visitors. :)