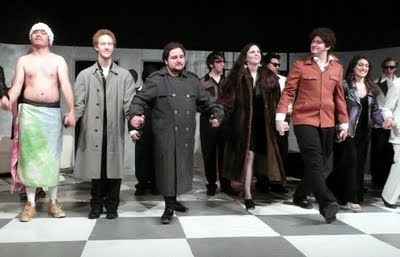 Last night my alma mater, California State University, Sacramento, produced the greatest of all operettas--there is almost nothing in second place--Die Fledermaus. It lives forever because the story could be anywhere, any time. Last night it was New York City in 1970, and it was a perfect fit.

So perfect was the casting that you should be able to guess from the picture above who each character is.  Go ahead.  Guess.

From left to right in the first row are:

OMG. There is no credit for the Frosch in the yellow Converse Allstars and shower cap. We know this is an opera, but you must credit the actors, too. He smokes grass instead of drinking Slivovitz.

Next is Falke, sung by Matthew Surges. Falke always looks something like him.

Surely you guessed that the next person, Jonathan Hansen, sang Alfred. He was the most perfect Alfred I have ever seen.

The woman in the fur can only be Rosalinda, ably sung by Michelle Lajeunesse. Certainly you will have guessed this. I wouldn't have known she was sick if her mother hadn't told me. They cut the czardas. If you don't know when it comes, you don't miss it.

She is next to her Gabriel, sung by Andrew Nickell. He totally got this character.

The star of the evening is next. People shouted loudly when Vanessa Martucci took her bow as Adela. She sang both arias and was simply fabulous. When I think of the singers I fly around to see, few are more fabulous than she. I definitely preferred her to the nameless singer I recently flew to LA to see. She has it all.

We see only the white suit for the pleasant Orlofsky of Frances Swiecki. 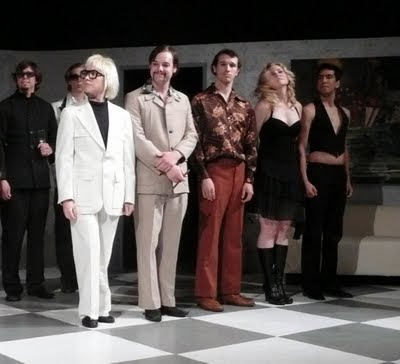 This is the right end of the lineup:  Orlofsky, Frank (sung by Will Tvrdik, who did a bit of Groucho Marx), Horowitz the lawyer (sung by Anthony Tavianini), and two of the astounding nightclub workers.

I have long been mad for Fledermaus and hum along in two languages.

There were some coordination problems due to the venue, a warehouse on R street. The small orchestra sat behind the set stage right, and the conductor stood behind the audience. It's hard to keep together in such an arrangement. There is apparently no credit for the conductor either, unless his name is Tatiana Scott. I'm confused.

All the old jokes appeared. Frosch draws a hook on the wall and hangs the hat on it. Apparently the jokes are forever as well.

One more thing. "Brüderlein und Schwesterlein" in the party was just as one would wish it. We loved every minute of it.
Posted by Dr.B at 11:18 AM