The Sexy Poppea we have been looking for 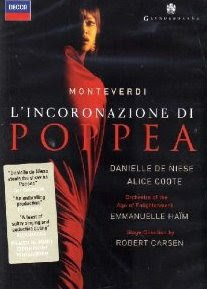 A lot has changed at Glyndebourne since the video for Monteverdi’s L’Incoronazione di Poppea was filmed in 1984 with Maria Ewing in the starring role. I was disappointed with the earlier version, but this film from the same venue in 2008 with Danielle de Niese completely makes up for it. Where to begin?

This opera comes at the beginning of commercial opera in Venice. If we have no royalty footing the bill, we must turn to operas which might interest the masses: namely operas about sex and violence, the same things that interest us.

The sexual ambiguity of the casting is probably also authentic to the original.

The incredible Alice Coote is Nerone, putting the role back into the treble where it belongs. Women definitely appeared on stage in Venice, and one of them sang Poppea.

Everything is up to date with 2008, including the staging. The prologue takes place in the audience. The first scene is a bed. Then we have a few books scattered around the floor for Seneca’s house; then a bathtub, first for Nero to kill Lucano in, then for Ottavia; then a scene at the beach created with a large drape and a picnic basket; lots of black men’s suits; in short, modern minimalism.

Of course the star of the show is actually Emmanuelle Haïm and the Orchestra of the Age of Enlightenment. In the extras it is explained that the two extant scores for this work consist of the voice parts and a figured bass. For any modern performance what the orchestra plays is completely invented in the modern era. The orchestration for this performance conforms to current standards for original instrument orchestras. For my ears the recorders and tambourines sound almost medieval. Are we overdoing a bit?

The playing is passionate and expressive. We are still in the period of opera where most of the music is Florentine Camerata recitative. There are outbursts of incredible coloratura and instrumental interludes for variety, but the endless recitative can get occasionally a bit tedious. Try to imagine you’re Italian.

I am writing too much, but it can’t be helped. All of Monteverdi is pre-tonal, but he clearly has a personal style for how the chords progress from one to the other that is quite beautiful. He is a very great master.

Yes, there’s plenty of sex, actually surprisingly a lot. Also violence. If sex and/or violence can be going on while this dialog is being sung, it pretty much is. Both men and women are in drag. There is talk about virtue and a character who dies for it. That alone has to be unique. On top of all of that we have the gorgeous Danielle de Niese.  Danielle and Alice's voices are well paired.

The contrast with the previous DVD could not be greater. This one is a lot more fun.  I am clapping to the computer screen.
#ad