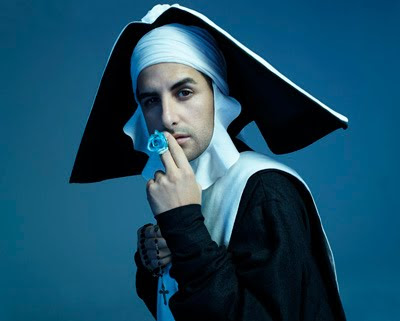 Rossini's Le Comte Ory made its way onto HD today. It was Rossini's last comedy. He had moved to Paris and worked very hard to adapt to Parisian style. There is an almost patter song for the almost buffo bass Raimbaud, sung by Stéphane Degout. There is lots of coloratura for everyone under the sun.

Why would you want this?

For Juan Diego Florez as Count Ory. He doesn't get an aria, but he does get lots of charming, absurd acting and an insane amount of high notes. Juan Diego became a father 35 minutes before the start of the opera. With no sleep he still made a spectacular performance. He looked a little hung over, not a bad look for Ory.

You would want it for the extraordinarily charming Joyce DiDonato as the count's page who in the end gets the girl. If I understood the dialog correctly, the countess is not married, and Isolier might be considered a suitable mate.

You might want it for the menage a trois in the second act, the only operatic trio I know of that takes place in bed. There's lots of messing around in this production.

You would want it for the Countess of Diana Damrau. She does get an aria. This is just about the silliest opera I've seen.

This buffo plot is given an almost seria musical treatment. I almost liked it.


I have followed with interest the commentary surrounding the Met's performance of the opera Le Comte Ory.

On one level it's controversial for its use of the old score. Tommasini has written about it in the Times here. Operating under Bartoli's influence, the Zurich Opera worked out a way to use the new score from the new not yet published Bärenreiter edition of Rossini's works and performed the opera using their original instruments orchestra La Scintilla. Here is a discussion by the publisher of the differences between the two versions.  The Met apparently could not be bothered and used the same old same old.

I couldn't make it to Zurich, but it would have been fun to try to hear the differences.

Should we treasure an opera simply because Juan Diego Florez looks cute dressed up as a nun and totally aces some high C's, D's and Db's? Is it really funny what his reprobate character is actually up to?

Which is the topic of the second controversy. This is basically a comedy about sexual abuse. At least that's one way of seeing it. Gert definitely had that take on it. If you go strictly by the libretto, I think the idea was to lure the Count into bed with his page when he thought he was with the Countess. The Countess would have been in on this ruse, I assume.

I think it is strictly a modern idea that women should be able to consider themselves safe from the sexual advances of men while continuing to hang out with them. Women are liberated only when men behave themselves.

The joke is supposed to be that Ory thinks he's getting away with something when actually Isolier and the Countess are tricking him. I think it's not really very funny.