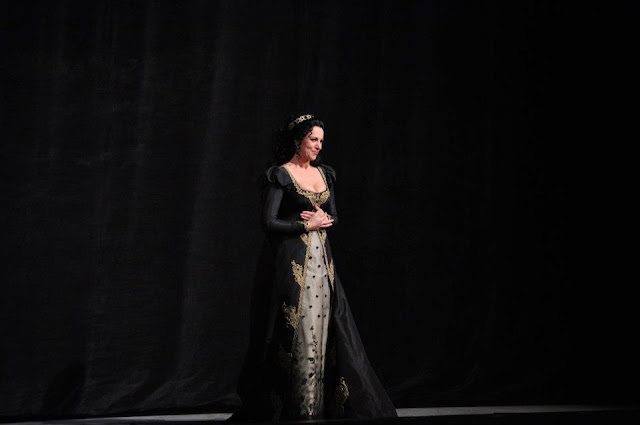 Opera Quiz.  What's the other opera where they shoot off a cannon from the Castel Sant'Angelo?  Answer at the end.

The Tosca from the San Francisco Opera is very much a traditional production.  The sets don't literally portray the locations, but they do strongly suggest them.  In Santa Fe we had a reproduction of an actual painting from the Palazzo Farnese, but in San Francisco there is just the idea of a frescoed room in an Italian palazzo.  And it is best not to stare too long at photos of the Castel Sant'Angelo trying to figure out how Tosca could possibly have jumped from it.  We are on the roof facing Saint Peters, as always.

The person sitting next to me said that this was her first Tosca.  I told her at the end that she should always compare Tosca with this one.  It was very nice indeed.

Tosca is wearing her traditional trains, and Angela Gheorghiu, our Tosca, flings them around to keep from falling over them.  I always remember Marie Collier in this role, viewed from about where I currently sit, avoiding her train in an almost magical way.  Angela made it all the way through in good voice and great style, altogether a very satisfying Tosca.  She placed the candles just as she should.  You believed completely when she stood over Scarpia shouting "mori"--die.

Roberto Frontali is a crude, sadistic Scarpia.  We aren't sorry when he dies.

Massimo Giordano looks exactly as he should.  He could sound better.  Should I give him advice?  I am always curious that none of the Italian tenors seem to be imitating Luciano.  Brighten the vowels, open the throat.  You will be glorious.

I asked the woman next to me what else she had seen.  She liked Moby-Dick.  The feeling of actually being on a ship was very powerful.